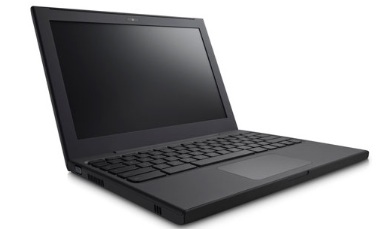 It looks as if Google is ready to let loose its Chromebooks on the masses. What’s so different about a Chromebook? The fact that the operating system, security options and programs/apps are all stored in Google’s cloud. This means that there really is nothing that will actually be saved to the device, which makes for a faster computing experience (8 seconds to boot up according to Google). The Chromebooks can connect either via WiFi or you can add a 3G option that will make the device self-reliant when it comes to a network/data connection.

At its I/O conference, Google has announced the first two Chromebook models that will go on sale at Amazon and Best Buy starting June 15th. The first is made by Samsung and it’s a 12″ model with a dual-core processor and an HD webcam that will cost around $429 for WiFi only and $499 if you opt for the built-in 3G (monthly data charges apply).

The second device is a slightly smaller and lighter Acer version that has almost the same features but with the addition of an HDMI port. The Acer model is WiFi-only and will cost $349. Google will also offer Chromebooks for Business and Education uses that add extra protection, security, and IT policy compatibility.

Maybe it’s just me, but it sounds as if Google’s Chromebooks, with their smaller and lighter frames, faster boot times, and the ability to save/share/sync ALL of your data to the cloud, might just give the uber-fashionable tablet device a run for its money…and I didn’t even mention how cheaper they are to the leading tablet device.