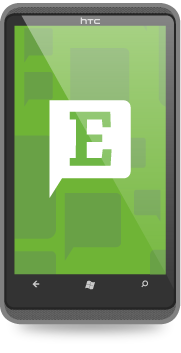 That’s right – The note/voice memo taking, task conquering, web clipping, all-in-one productivity app finally gets a native version for Windows Phone 7 (WP7). There are so many use-cases for the Evernote app. Now WP7 users can explore all the ways Evernote can be used for personal/business tasks. 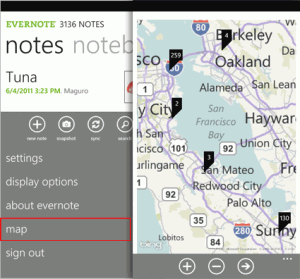 I am a fan of the WP7 user interface – It’s just beautiful. The Evernote app for WP7 exploits that beauty and lets you save and find your ideas and memories any time, anywhere. All of the features that Android, BlackBerry, and iOS users are accustomed to make an appearance, in addition to some cool Microsoft-specific features that can only be found on the WP7 version like note mapping that uses Microsoft Bing mapping technology to to show you where your notes were created. To allow the app to save your location, go to the Location panel in the Settings menu and check off the options. Then, you can view you notes on a map.

For those users who want to share some of your ideas captured in Evernote, Facebook sharing is built-in as well. Simply connect your account and the Facebook post option is prominently displayed as one of the three note options for every note. Hopefully, Evernote will add Twitter and maybe Tumblr sharing as well in future updates for even greater social networking capabilities.

So if you’re one of the brave ones and stepped into the new mobile platform realm via WP7, visit the Evernote blog to learn more. If you’ve been waiting on Evernote to come to WP7, you can jump over to the WP7 Marketplace (be patient if it isn’t there), and download your copy…and let us know what you think in the comments section.