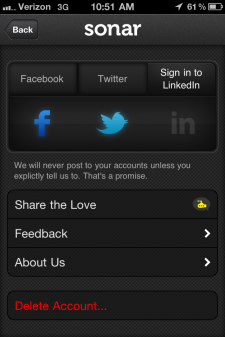 The Sonar app is a great way to find out how you are connected to other people where you are located. By checking in to a location using Sonar (pulls location information from Foursquare) you see not only who has also checked in, but how you are connected. Initially, Sonar used Twitter and Foursquare connections. Now the app has turned on LinkedIn as a method for fishing out your relationship to those around you.

Actually, you don’t even have to check-in to see who is at a location and if there are any connections. Upon opening, the app shows you nearby locations (you can also search if  your location is not on the list), and the number of people currently checked in.

Tapping on an individual location shows you more information and reveals public information about the people checked in: Profile pic & and name, Twitter, Facebook and now LinkedIn profile links, and if there is a connection. Tapping on a person checked in will give you more public profile information, how many connections on each social network you share, and the ability to send them a “hello” message according to which network they belong to. By tapping the network, you can see recent posts and updates they have recently made on each network. Specifically, LinkedIn will show you current and previous titles/job descriptions and places of employment, and networks they belong to. 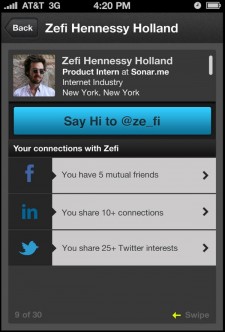 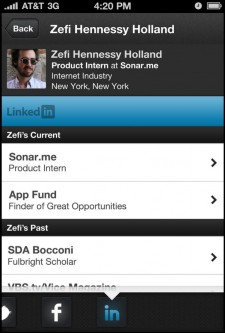 What’s cool about Sonar in my opinion is the fact that you’re not as much of a stranger in a crowd of other strangers. Using Sonar, you can possibly find a common interest to spark up conversation especially if you’re not a social butterfly (even if I were outgoing, I wouldn’t want to be called a social butterfly…just sayin’).

With the addition of the LinkedIn connection, you can now use a more profession angle to approach somebody who has a direct or indirect connection to you. If you belong to the same groups, connected to the people, or you want to learn more about their current work, Sonar gives you more ammunition to “break the ice” at a networking event. Just a reminder for all you folks who STILL think that is a little “stakerish”, All of the info displayed by Sonar must be public information shared on LinkedIn and other sites. Any information deemed private by the user, Sonar doesn’t share that info.

So if you find it hard at times to just walk up to random people and initiate conversion, Sonar can at least make the person less random. The rest is up to you.