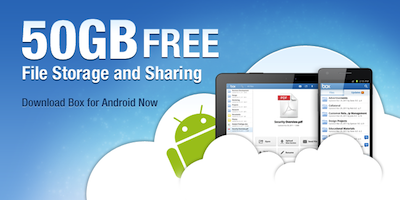 I’m still riding the Dropbox train, but all the waves that the folks over at Box are making in the cloud storage space is making it real hard to argue the pros of my little 8 gigs of free space with DropBox when Box is “closing deals” like partnerships with the new HTC devices being announced as I type this at Mobile World Congress, and dishing out 50GB of free space for all Android users.

Instead of trying to create its own cloud storage service like other competitors (namely Apple’s iCloud), HTC has announced that it has teamed up with Box to offer users of its new HTC One flagship smartphone 25GB of free storage free for 2 years. This also helps out Box gain momentum to go head-to-head with the likes of Dropbox, its widely popular competitor. If Box can successfully align itself with partners like HTC (like it’s done int the past with LG and iOS) by offering “can’t beat it with a stick” storage deals, Box might just stand a chance against the Dropbox Juggernaut.

Speaking of beating things with a stick, similar to the deals previously struck with LG and iOS devices, as promised, Box has also extended its 50GB of free space for life for all Android users who download and/or create a new account of the latest Box update via their device between now and March 23rd. (for new and existing Box users).

The Box service is pretty solid and is on par with its Dropbox and SugarSync competitors, with the exception of not having a desktop version (mobile or online only). But 50GB of free space for life may be the caveat it needs to pull users who already use the former services for free over to Box (raises hand) if it means more way more free space than any other service currently on the market.

So if you love “all things mobile” and ventured out to Barcelona, Spain for Mobile World Congress, check out the Box folks to get an in-person demo of the latest Android update. For the rest of you Android users living in the real world, be sure to update or download the newest update of Box for Android by March 23rd to get your free 50GB of space and let us know what you think in the comments section.