JOBS Act Brings Open Source Investing to Startups: Crowdfunding Lets Anyone Own a Piece of a Business – But Does It Really Level the Playing Field? 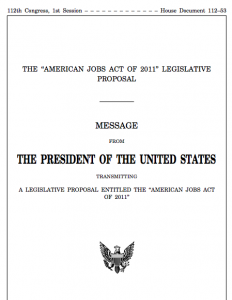 We’ve all heard the stories of the brilliant tip from a bank or investor – the one that made millions. We can’t imagine ourselves ever missing out on what was so clearly a no-brainer opportunity to make more money than we’d ever imagined.  But would we really have bet the farm on that opportunity?  Hindsight is 20/20, and investors see hundreds of business ideas every week. The decision to move on an investment is often made as much on the people doing the presenting as it is on the business plan.

Thanks to a few websites — and a new law — all of us, not just the ‘accredited’ investors will be able to play venture capitalist in the near future thanks to the JOBS act, recently signed into law.  The crowdfunding portion of this bill will allow companies to solicit investors from a pool of millions without filing all the required paperwork they currently must file to register new investors.

Kickstarter and several similar websites have been around for a while, soliciting ‘donations’ from people to support various ventures, be they technology products, card games, new albums or independent films.  These were not investments – you may have been able to pre-purchase one of the products being pitched, but you didn’t actually become an investor.  Thanks to the JOBS act, instead of just pre-ordering a product, I can own a piece of the company.

Obviously this will allow businesses to solicit from many more investors, and allow all those no-brainer opportunities to flourish.  Ideas that a bank or traditional investor wouldn’t even bother to read an executive summary on can be promoted around the Internet through Twitter or Facebook.  People with brilliant ideas but wholly unable to make a solid pitch to a VC firm just need to put together a solid website on their idea to solicit funding from the rest of us.

Sound like the greatest thing since sliced bread for small companies in need of funding?  Not so fast. There are some drawbacks that aren’t so obvious.  Traditional business plans that would get funding from large VC firms or banks with SBA loans might not be the best candidates for crowdfunding. These investments are typically more solid, and would qualify for lower interest rates on loans, or better terms from VC firms than they might get from a crowd.

As every business starts to jump on the bandwagon of crowdfunding their latest idea, it could become easy to get crowded out of crowdfunding. Then we’re back to giving only a handful of ideas all the attention, regardless of their actual merit.  Instead of the guy who when to school with the VC firm partners getting all the attention, it’s just whoever happens to know the people running the crowdfunding website, or whoever has the best SEO algorithms.

The biggest disadvantage in my mind is the complete loss of first-mover advantage.  It’s an important part of the business landscape today.  In a world where news travels incredibly fast, being an also-ran can crush you.  Many of the ideas you see on Kickstarter aren’t going to be easy patents, and protecting your ideas and work via patent isn’t the most effective thing in the world; just ask Apple.  Letting everyone with a couple grand see the next big thing in widgets could allow a better funded company to swoop in, take the idea, and rush it into production with a much bigger marketing campaign, winning the game of perception.  Sure, you may win a couple million in court, and get to keep a couple hundred grand of that after paying attorneys and your own investors, but that’s a far cry from the Zuckerberg-level fortune you could have amassed.

I was personally interested in crowdfunding to find an extra $15,000 to help finish some renovations on a duplex I rent out, but quickly realized that it wasn’t worth giving up equity when I could get a loan. Even crowdfunded loan sites were asking for double the interest rates I could get from a bank.  Crowdfunding isn’t going to be a good choice for traditional business models. Instead, it’s going to be great for abstract products and niche products that would have never been able to darken the door of a VC firm.

Is crowd funding a great idea to increase the availability of funding for small startups that wouldn’t have been able to bootstrap or fund through traditional means?  Absolutely.  Is it a silver bullet that will solve all financing needs without drawbacks and potential pitfalls?  Absolutely not.  Keep your product and financing need in mind when looking for funding, and if you’ve got a great idea – send it to me. According to the new law, I can invest up to $2,000.