My new office set-up: got my iPad wrapped in soft, brown leather inside the Brookstone Keyboard Pro case.

If you’ve been following along, yesterday I found out that my MacBook Pro is going to be in the shop for longer than I expected and that I’m going to be working from my iPad all week. Last night I decided to try and get ahead on some of my work and started drafting a blog post for the site when I realized that I needed some screenshots from a website that doesn’t work on the iPad.

“No big deal,” I thought to myself, “I’ll just borrow my roommate’s computer for a minute.” So I hopped on his laptop, took a few screenshots, copied them to a USB flash drive, and walked back over to my iPad to plug it in. A brilliant plan except… why did I think that iPad’s have USB ports?

As I said in the title of this post, I’m an idiot. 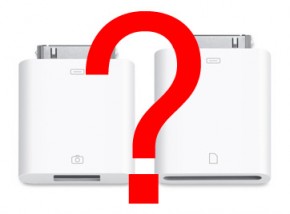 So there I am, a flash drive in one hand and my iPad in another, trying to figure out what the best course of action would be. If only Amazon yesterday shipping were real, I could order the iPad camera connection kit and actually connect both the flash drive and SD cards to my iPad. I’ve thought about picking the connection kit up for a while, as it has a ton of different uses outside of simply transferring files. For example, did you know that you can use the kit to connect a USB microphone to your iPad? That could be a cool, and quite portable, podcast recording set-up.

So I’m thinking, what other ways can I get my files to my iPad? I’ve got Dropbox installed, but I picked an incredibly long and complicated password that I don’t have memorized. Instead, that password is being stored securely on my MacBook’s keychain… which is at “the Depot.” I suppose I could reset my password, but then I’d have to reconfigure every device I’ve set up to use Dropbox–not just my iPad, but my phone and my Mac when I get it back. That seems like too much work for what should be a simple task.

Another option is, I could fire up the web version of Evernote, the app I’m writing this post in and, finding myself spending the most time in on my iPad so far. Since I’ve memorized my Evernote password, it would actually be pretty easy to fire up the in-browser version and copy the pictures into the draft of the post. But then, when I need to get those pictures out of Evernote and into WordPress later, will that work? Maybe, but that could be a headache and doesn’t seem like a perfect solution either.

Eventually, I ended up signing into my Gmail account and emailing the pictures to myself. Yup, email, a form of sending messages electronically that’s older than I am, and yet is still one of the easiest and most reliable ways to send text and small documents between not just people but also devices. The great thing about email on the iPad is that I can later send my attachments anywhere I want want. I can save the screenshots to the camera roll, export them to other apps–you really have a ton of flexibility with documents that arrive on your iPad via email.

So, 24-hours in, I’m problem solving. That’s about what I expected. So far, nothing truly preventing me from doing all of my work on the iPad, so that’s a good sign.