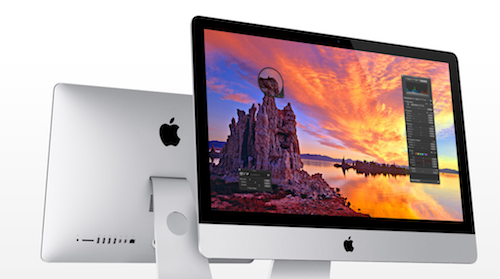 Explaining hard drive technology is not nearly as fun or glamorous as talking about how thin or light a new device is. You can’t exactly pull an iMac out of your pocket to exclaim “It’s so efficient!” But in reality, the Fusion Drive might be the most innovate idea Apple has come up with in awhile.

My evidence is anecdotal, and based on my experience, but here’s my story. I bought a new computer a couple months ago, and went into the Apple store all ready to buy a new MacBook Pro. That’s what I had before, and I loved it. I thought the MacBook Air was just a machine that sacrificed power for looks, and I didn’t care that it was super thin. But what I had forgotten about was the flash memory.

Basically, the MacBook Air has solid state (aka SSD aka flash) memory. Without getting too technical about it, it runs faster. It can open programs and load processes quicker than old-fashioned hard disk drive (aka HDD) memory. So what’s the problem? It’s significantly more expensive than HDD memory: until the last couple of years, we only used SSD memory in small amounts, like thumb drives and old-school iPod Nanos.

Both the 13″ MacBook Air and the 13″ MacBook Pro start at $1199. But the Air comes with 128GB of flash storage, whereas the Pro’s default is 500GB of HDD storage. That’s obviously a huge difference in the amount of storage available, and even with the push toward cloud storage, 500GB is really handy. So like I said, I had planned on the Pro, with it’s serious storage. But then I got a chance to try the machines side by side.

I stood in the Apple store and opened programs simultaneously on the Air and Pro, and the speed of the Air convinced me that was what I needed. I know the way I use computers: I run 4 or 5 programs, I run lots of tabs, I have a tendency to move around a lot. And if there’s a wait, I can get distracted. Bad news. So for me, speed trumped storage.

What’s my point with all this? The premise of the Fusion Drive is that the trade-off between storage and speed is bogus. We want both, of course! Fusion Drive is, literally, both kinds of memory operating together to form your “hard drive.” The new Fusion Drive that will begin shipping on the new iMac will be 128GB of SSD (just like my Air) PLUS either 1 or 3 TBs of HHD. That’s a lot, to put it mildly.

Evolution of the iMac. All images from Apple.com.

While it’s true that other “hybrid” drives of SSD + HHD are already on the market, Apple is the first manufacturer to give the technology a snazzy name and really promote it as a selling point in new machines.  In true Apple fashion, they’re looking to provide a superior experience with a new technology, which then becomes a market advantage for the company.

And while the iPad Mini may be cool, it’s definitely not the first tablet of its size to be introduced to the market, and it’s definitely not the first time we’ve seen an iPad. It’s hard to argue that it’s the revolutionary device we found in the iPhone or iPad. And it may not be glamorous, but the Fusion Drive is the future of storage for computers. The only question now is when it will come to laptops and mobile devices.