#MarioAtCES: What Is 4K Technology, Anyway? 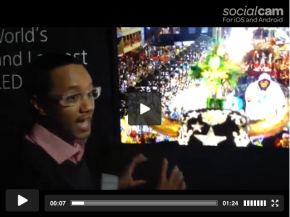 If you’ve been following CES coverage at all, you’ve probably heard about “4K TVs.” But that doesn’t mean they cost four thousand dollars! Let’s break it down for the non-videophiles.

4K refers to display quality. Native resolution in 4K is 4096×2160 pixels (give or take – the unsurprising, the industry hasn’t set a defined standard). Your current HD TV screen (if you have one) is 1080p, or 1,920×1,080. For those of you that don’t speak pixel, that’s a LOT more pixels than we currently have now in our HD screens; more pixels means images can be shown in more detail, so they look more realistic.

Unsurprisingly, lots of movies are shot in 4K, after all they are going to be shown on giant theater screens. Until recently though, 4K displays were not available as consumer products, and that’s why their appearance at CES is getting so much hype: it’s like MEGA High Definition.

You know what it’s not though? Ultra-HD. ALl over CES right now people (including major manufacturers) are referring to 4K as “Ultra-HD,” but they’re actually different specs. Ultra HD is technically supposed to be a resolution of 3840x2160p. Yes, it’s very close to 4K’s 4096×2160, but that slight difference actually results in a different aspect ratio.

Does it matter? Right now, not that much. Right now a 60″4K TV is going to set you back between $20,00 and $25,000. Sure, there will probably be 4K TVs under $10,000 in the next year, but for most of us that still means it’ll be awhile. And that’s good news: it’ll give the industry a chance to make peripherals and content that can actually take advantage of the crazy new high resolution, instead of trying to upscale normal HD.

Want to see it in action? I introduced the first 4K OLED TV here at CES a couple days ago. Watch the video here!

Want some  more 4K reading material? Check out this great article on AVForums – they have some great info about what 4K is and what 4K content is already out there.