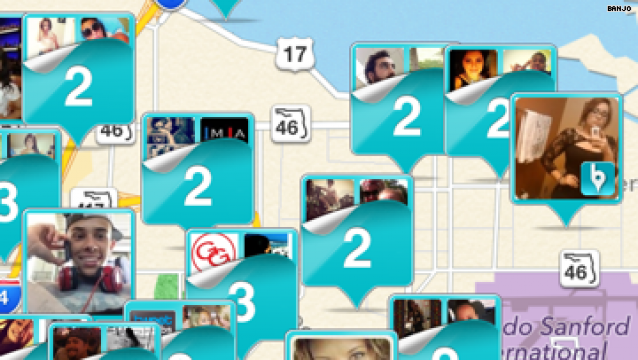 Social media has played a part in the George Zimmerman case almost since the beginning. Judge Debra Nelson ruled before the start of the trial that Trayvon Martin’s texts and social media statements, which included references to fights at school and marijuana, wouldn’t be allowed in opening statements.

Zimmerman’s defense team, meanwhile, has taken to social media to make his case. His attorneys have a Twitter account, @GZLegalCase, with updates straight from the Mark O’Mara Law Group about Zimmerman’s defense.

Through a related website, gzlegalcase.com, the attorneys are also blogging, fundraising for the defense and sharing documents and press releases related to the case.

Many tweets related to the defense use the hashtag #GeorgeZimmerman, while many of those specifically discussing Trayvon Martin use #Trayvon.

Banjo, an app that combines location information and social media, allows you to zoom in on a geographic location such as the trial’s location of Sanford, Florida, and then filter your search by specific keywords. You can see in real time what people who are in Sanford are posting on Twitter and Facebook, as well as sharing on Instagram and Pinterest, about the trial.

HLN’s After Dark is covering the case in a variety of unique ways, including re-enactment videos, polls, debates and pictures on Instagram. Hosts Vinnie Politan and Ryan Smith are making themselves available on Twitter and Facebook taking questions from followers to incorporate into the nightly show.

Of course, HLN’s Nancy Grace is on Twitter as well, sharing her expert opinion on what she’d do if she were an attorney on the case. Consider hers a must-follow account, as well.

Other HLN hosts are tweeting about the case as well, including Robin Meade, host of Morning Express and Raising America host Kyra Phillips. HLN also has a George Zimmerman Trial Facebook page with all the updates you need to stay on top of the case.

If you’re looking for some coverage with more of a regional flair, HLN affiliates WPLG, WESH, WKMG are running special Twitter feeds for live updates. Their reporters are tweeting frequently while the trial is going on, so they’re a great way to keep up with developments.

And don’t forget, HLNtv.com is live blogging the trial every day court is in session!