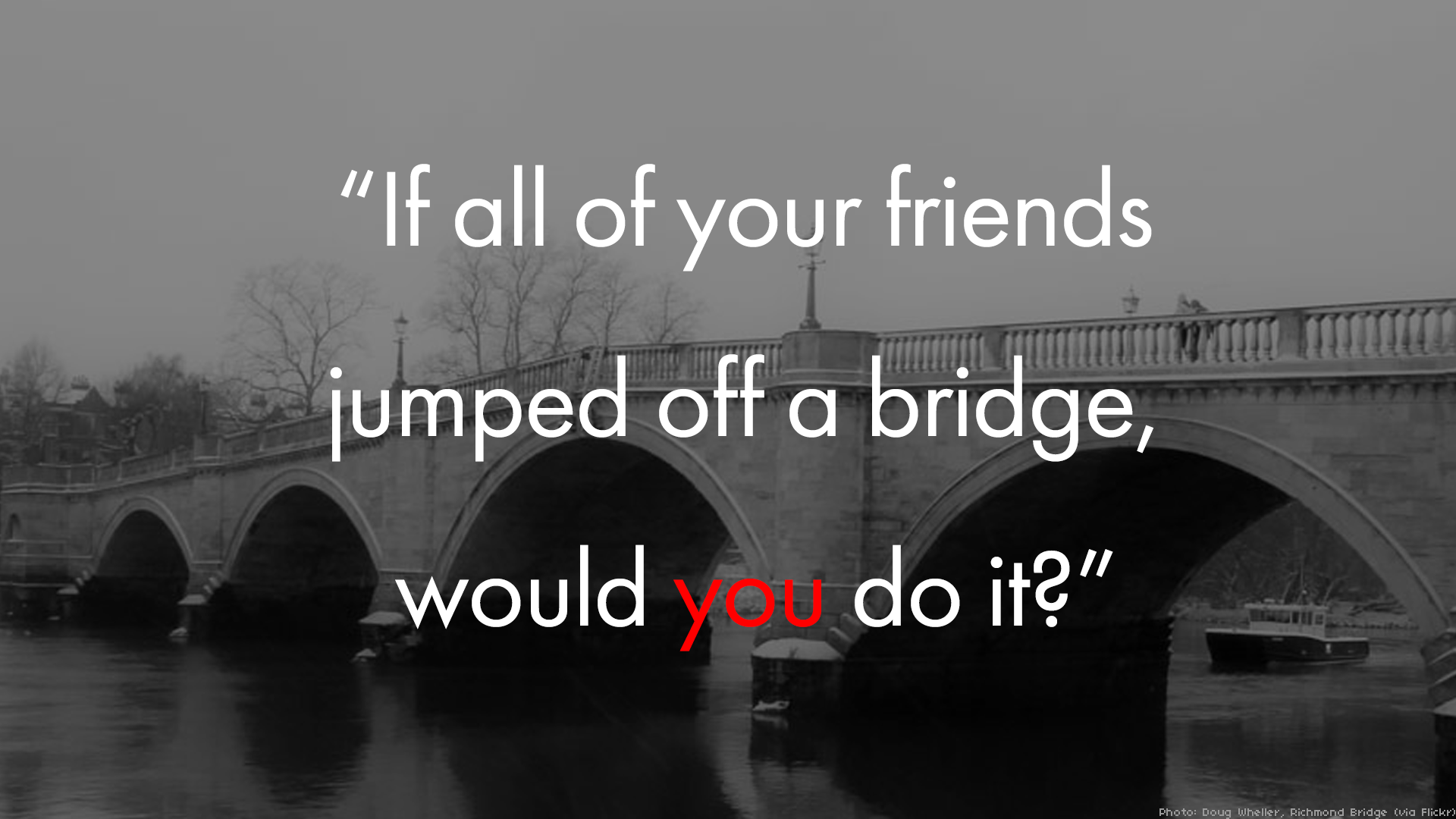 For decades, parents have attempted to make a point about peer pressure to their children with this tired old phrase: “If all of your friends jumped off a bridge, would you do it?”. It’s a way to trying to help kids understand that while peer pressure can sometimes be good (like when friends pressure your child to try out for the basketball team), they need to think critically when peer pressure is threatening to lead them astray (like jumping off a bridge).

Today, I propose that we update the phrase for the 21st century, and ask our kids something new!

How about this new phrase:

If all of your friends join Facebook before they’re 13, should you?

One thing parents all need to know: thanks to the FCC’s enforcement of The Children’s Internet Protection Act, Internet services like Facebook, Twitter, ask.fm and Yik Yak are supposed to be preventing access to objectionable or questionable material by restricting access to that content. In practice, most sites do this by simply not allowing anyone under the age of 13 to sign up.

But if you, as a parent, actually use services like Facebook and Twitter yourself, you’ve probably noticed something odd: kids often sign up for accounts and lie about their age to get online! But just because your kids friends are doing this doesn’t mean it’s OK! Facebook has a whole help center, called Tools for Parents and Educators, which explains how you can report kids under 13 using the service, how to get photos of your child removed, and how to report abuse you either know is occurring on Facebook or have heard is occurring there.

Just because your child is 13 or older doesn’t mean you should let them online with no restrictions. This should be a parenting decision—just because children are legally old enough to join a social network doesn’t mean they’re mature enough to handle the responsibility.

Or let’s try another one:

If all of your friends are bullying classmates with an app, should you?

The web, smartphones, and apps make it easier for kids to do terrible things to one another without facing consequences. Anonymous communication app Yik Yak recently used geofencing to shut off access to the app on middle and high school grounds because students were using it to anonymously harass and intimidate their classmates. Several teenage suicides have been linked to harassment by anonymous commenters on ask.fm.

On many social networks, especially Facebook but to a lesser degree places like Twitter, Tumblr and Instagram, make it relatively easy for a parent to trace comments back to their source. So if your kid is being bullied (or doing the bullying) on these sites, you can get to the bottom of it and take clear action.

But on anonymous sites and apps, as a parent you can’t as easily figure out what’s going on, and who is doing what. You need to be proactive as a parent by limiting what apps and sites your children have access to. Also, make sure to get a conversation started, and talk to your kids about bullying and anonymous communication. If your kids are at least aware of the problem

One more phrase I think you should consider asking your kids:

If all of your friends are sexting, should you?

I’ve blogged before about how as many as 1 in 4 teens is sexting and how parents can decode their children’s texts. In an age where parents are increasingly worried about the kinds of trouble their children can get into online, sexting can be a real challenge to deal with.

While it can be an uncomfortable topic for many parents to deal with, the best way to tackle issues like this is head-on. Have a frank discussion with your child about texting and sexting, and let them know what you consider both appropriate and inappropriate. This way, if something comes up later, it will be clear what your parenting policy was and you can work from there.

Have any other suggestions for new twists on this old phrase? Leave them in the comments below!