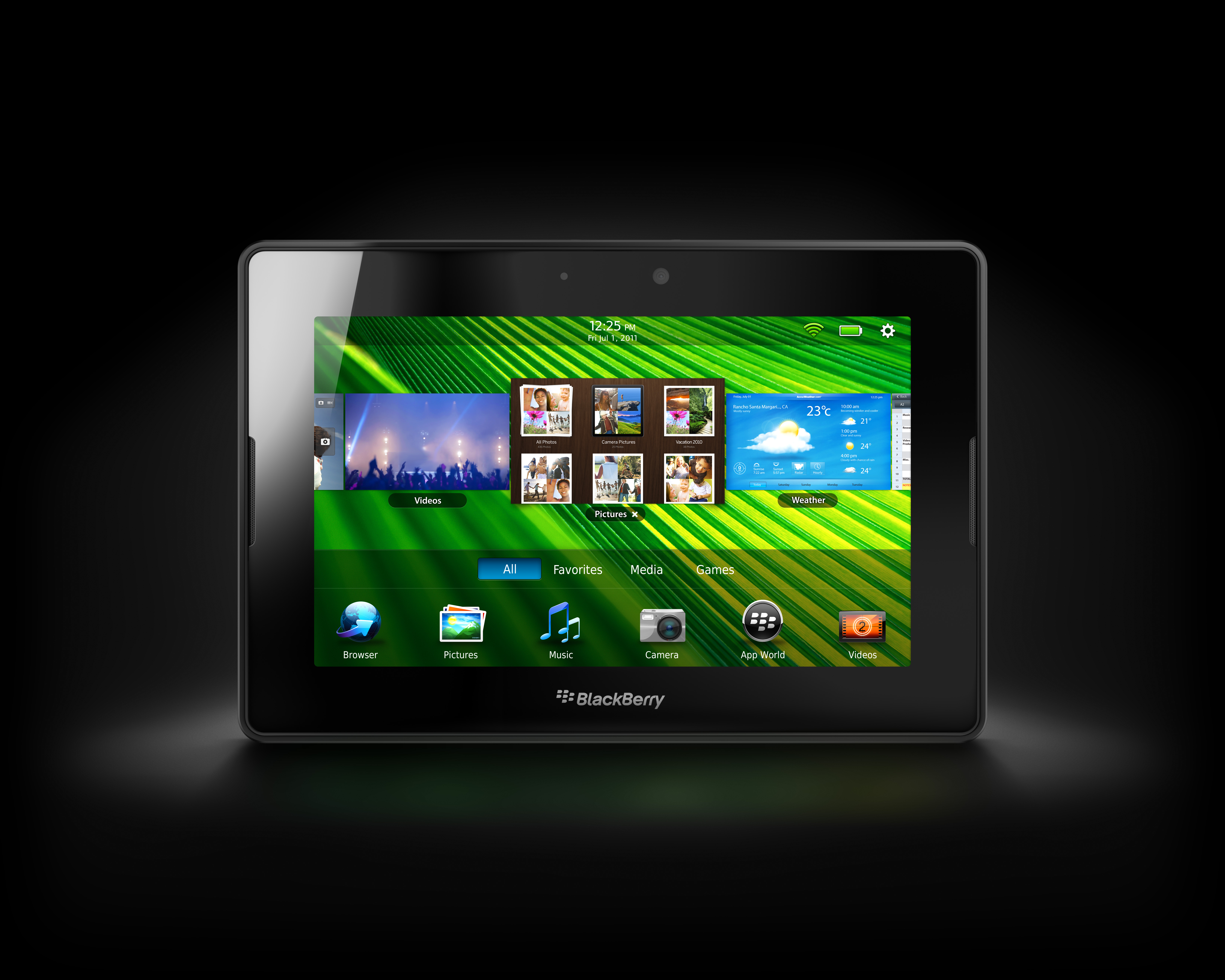 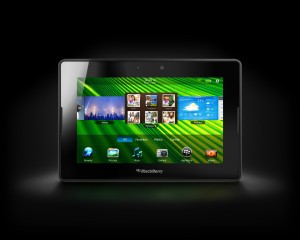 With Apple holding a near-monopoly of the Tablet market (currently at 73% market share) , and Honeycomb-based Android tablets finally hitting the market, is there room for a brand new platform?  RIM, creators of the BlackBerry series of smartphones, seems to think so, this week releasing their Wi-Fi only PlayBook tablet running a custom-designed operating system and architecture.  With prices starting at $499 for the 16GB model, is the PlayBook a legitimate 3rd option in a market in which Apple had nearly a year head start?  Today, we take a look.

Compared to other 7-inch tablets on the market, like last year’s Samsung Galaxy Tab (based on Android 2.2 ‘Froyo’ – a version not optimized for the tablet experience) the PlayBook has a clear advantage in several areas.  For one, the screen is gorgeous – displaying a huge contrast range with deep blacks and bright whites – and is a true pleasure on which to view HD video content. The front- and rear-facing cameras, as well, are both equipped with HD-level resolutions allowing the user to capture 1080p content easily.

The tablet feels great in the hand, with a soft, rubbery exterior shell that makes gripping the device one-handed a breeze.  The device is clearly meant to be used primarily in landscape (lengthwise) mode, with the BlackBerry logo on bottom and the power, volume, and play/pause buttons on top.  While many people have reported having difficulty using the small, recessed power button to turn the device on and off, I experienced no such problems. In fact, compared to my 7” Samsung Galaxy Tab with it’s large and easy to accidentally depress power button, I found it a relief that the button was recessed making it difficult to inadvertently power down the tablet.

The interface itself seems intuitive, swiping your fingers along the bezels of the display to perform multi-tasking activities.  While the software is still buggy, with applications force-closing both in the background and while running fairly often in my testing, the multi-tasking mechanisms of the PlayBook are second to none, forgoing the need to place buttons on the front of the device. Swiping left and right along the bezel allows you to move to the applications to the left and right (a system that fans of the webOS card system will immediately recognize).  The demonstrate these features, I put together a quick video showing how they work:

Who Is The Intended Audience?

Users looking for native email, calendaring and contact apps, a la Apple’s iPad or any of a number of Android tablets, will be disappointed by the PlayBook. Deceptively, icons for Gmail, Twitter and Facebook included on the homescreen, while they look like apps, are simply shortcuts to those services individual websites.

The PlayBook is clearly designed for a certain segment already using RIM’s BlackBerry smartphones. The BlackBerry Bridge feature, whereby a user can tether their phone to their PlayBook and receive tablet-sized access to their email, contacts and calendar, is the only way to run these essential business tools native on the device.  The experience here, however, is exactly what you’d expect – easy to use applications that take full advantage of the tablet’s large display.

But if BlackBerry users, often those involved in business or government where BlackBerry-specific features like secure email are required, are the target market, then why is this device called the ‘PlayBook’ and not, say, the ‘WorkBook’?

The PlayBook comes preloaded with two games, Need for Speed: Underground and Tetris, both of which excel on the device.  At the BlackBerry launch event in Manhattan last week, a number of attendees could be seen playing these games while testing out the tablet. The screen enables excellent video playbook, and included apps like ‘Video’ or ‘NFB’ (which allows users to stream award-winning documentary films from the Canadian National Film Board) really show off this capability as a major selling-point of the device.

Clearly, the PlayBook is torn, situated somewhere in the middle of two potential audiences – the one that wants a tablet for ‘Play’ and the other, traditional BlackBerry audience looking for a new way to work.  While promises from RIM are beginning to line up (native apps are coming! Android apps are coming! 3G and 4G versions are coming!), right now the device doesn’t seem to be clearly defined.  With the iPad platform already snatching up lucrative markets like medicine, and major app developers already developing for iPad first, Android second, it seems as though RIM is going to have a difficult uphill climb convincing users to embrace their new platform.

So What About This Browser?

That said, the browser is actually one of the PlayBook’s strongest features.  Pages are a pleasure to interact with on the PlayBook, and response feels fast and snappy. Unlike the PlayBook’s Android counterparts, embedded Flash rarely slows down sites and HD video up to 1080p is viewable using embedded Flash players without having to resort to external apps as on other devices. 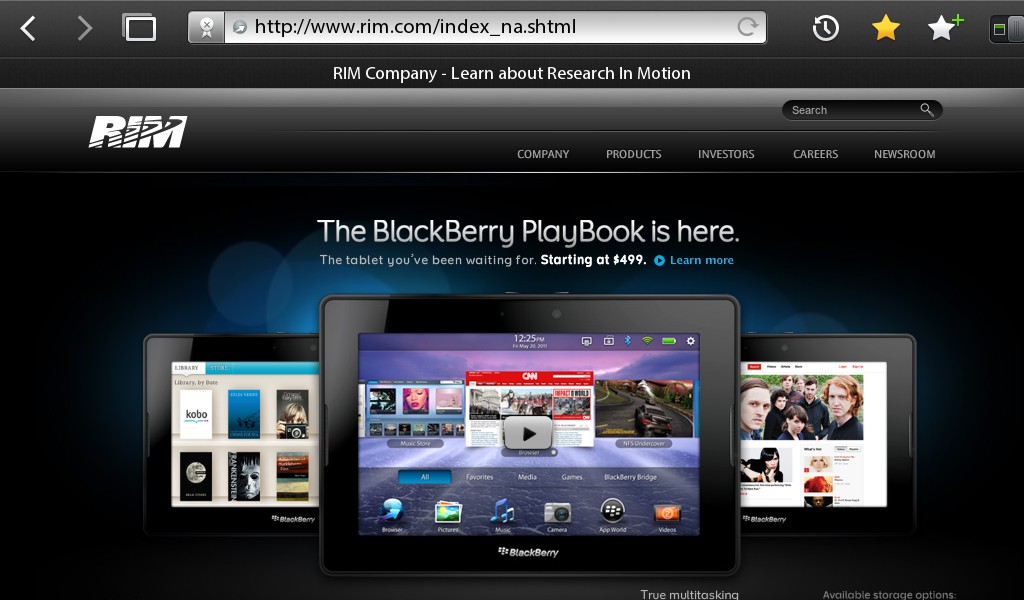 Unlike the multitude of complains I’ve seen about Apple’s low-resolution camera equipment on the iPad 2 where clearly the function is to provide videoconferencing and little else, the BlackBerry PlayBook seems uniquely designed to function as both a content-creating and videoconferencing tablet.  With 1080p HD video recording capability on both cameras,

The problem is that, while the iPad 2 may lag behind in camera hardware, it provides the excellent iMovie app to allow users to edit and share their videos taken with the device. With no iMovie equivalent in the BlackBerry PlayBook’s App World, what you’re supposed to do with that video content once you create it is anyone’s guess.

Another major problem for the time being is a lack of any videoconferencing solutions for the device.  By going with a brand-new operating system (Android app support, which would help to alleviate this problem to some degree, isn’t even coming until this summer), RIM is at the mercy of third-party software developers like Skype, ooVoo and Tango to add these features to their device.  Until such software is available, PlayBook users will be stuck missing out on features readily available to consumers of Android-based tablets, nevermind the iPad with it’s FaceTime support.

How ‘Bout Them Apps

While tens of thousands of apps will be arriving via the Android and Java players this summer, a mere 3,000 or so apps are launching this week with the PlayBook.  While at first this suggests a significantly higher number of native apps than Android’s Honeycomb platform (where estimates in the tens of apps seem generous), most of these apps are simply Adobe AIR ports from other platforms, many of which don’t even support multi-touch interaction.  Few of the apps available today are specifically designed for the device itself, excluding those that ship with it.

I’m not surprised by this – Android and iOS devices have had years to build developer relationships and applications store success stories.  The PlayBook is the new kid on the block, and until RIM is able to convince hordes of new developers to come to the device, things are probably going to remain this way.  The PlayBook App World has a long way to go, but RIM’s BlackBerry brand still has strong recognition, even as their smartphone market share continues to slide.  Time will tell whether or not killer apps for the PlayBook are on the horizon.

Several apps that ship with the device, however, are remarkable, including the ‘Calculator’ app, and the ‘Pictures’ app, both designed by The Astonishing Tribe, a recent RIM acquisition.  The polish of these apps is second-to-none, as you can see in the screenshots below. 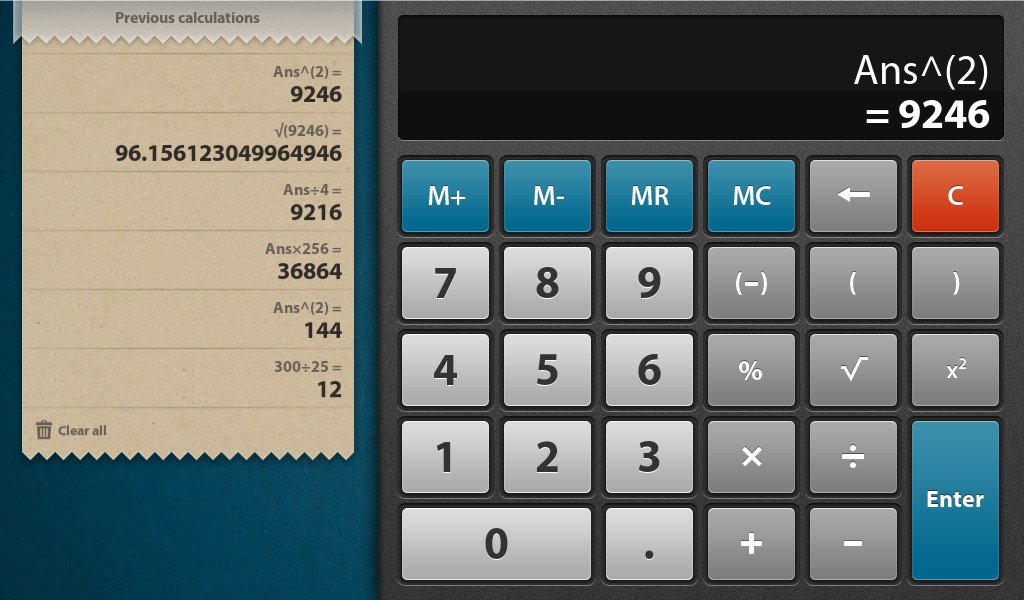 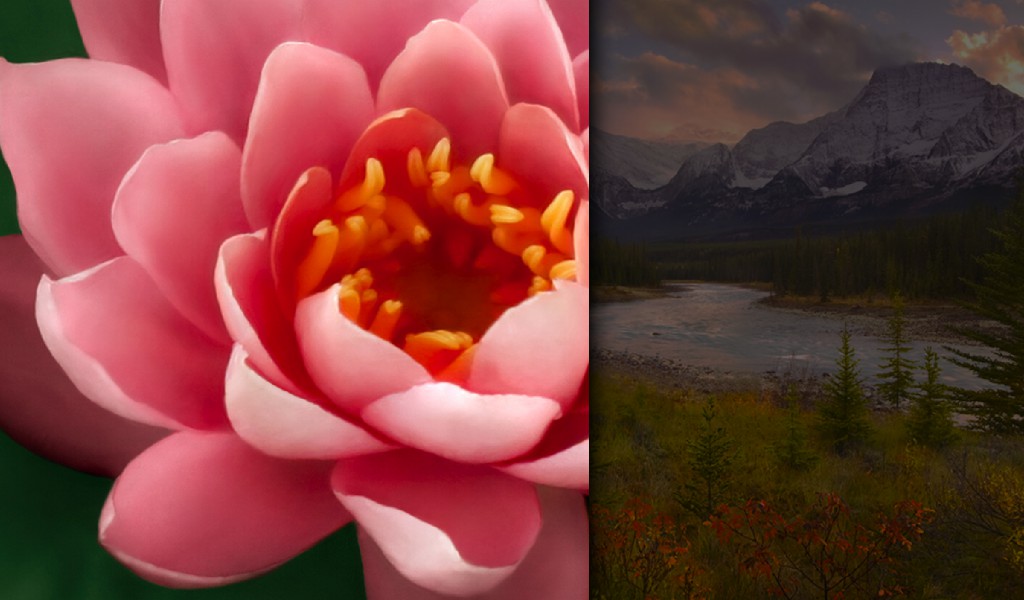 With the Wi-Fi only model out this week, the first iteration of the BlackBerry PlayBook is clearly designed solely for BlackBerry phone users who are looking for a small, powerful tablet to work and play on.  If that’s you, then maybe the PlayBook sounds like a worthy competitor to Apple’s recently launched iPad 2. It does offer a powerful browsing experience (with Flash), easy multitasking, an large-screen version of your email and calendar, as well as HD photo and video opportunities. Otherwise, my suggestion is to wait for 3G/4G models to appear this summer and for the app store to mature.  By then, the PlayBook could be a real competitor.