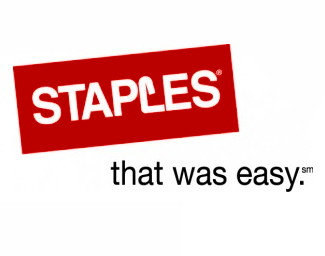 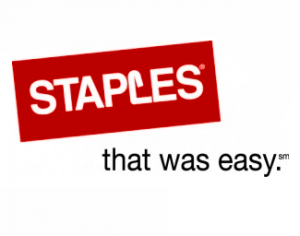 This holiday season, we’ve teamed up with @Staples to bring you some of the hottest tech gadgets at the cheapest prices. The fact is, Staples isn’t just an office supply store anymore, they’re also a destination for the hottest portable tech like eReaders, tablet computers and accessories. From rock-bottom Black Friday prices to the #techdout contest Mario is hosting where you can win a $2,300 tech makeover, Staples knows what’s up this year.

Can’t afford everything you want? That’s cool, neither can we. But this upcoming Wednesday, November 30th from 8-9pm EDT @MarioArmstrong is holidng a Twitter party with a Q&A. Prizes will include a Kindle WiFi, the new Kindle Fire tablet, some cool accessories, a portable scanner and a $200 Staples gift card.

Want even more? No worries, Mario is going to keep brining the tech from Staples to you through the holidays. So stay tuned and see what else we’ve got in store. But first, what you’ve all been waiting for—the Black Friday deals. First up, some rules: Staples is running a lot of EARLY BIRD SPECIALS, meaning you’ve gotta make it into the store between 6am and noon to cash in on these deals. Most of the big-ticket items fall into this category (laptops, eReaders, tablets, etc.) so if you see something you want, make sure you get to the store EARLY to pick this stuff up. You may even want to think about waiting in line if there’s a MUST BUY item for your small biz.

Want to work on the go? You’ve got two major choices, a tablet or a laptop. If you don’t know which one is right for you, don’t freak out, head into a Staples store and TRY THEM OUT. Seriously, that’s the only way you’re going to be able to make the decision. Know you want a laptop? Perfect. Check these deals out.

Our first contender for Black Friday at Staples is the lightweight. I don’t mean physically as this is a full 15.4″ laptop, I mean more in terms of specs. Don’t know what kind of laptop you need? Then this is your starter laptop, the bare-bones model that will help you get your Word/PowerPoint/Excel on, do awesome media features including watching and burning DVDs, and have ample power for YouTube HD.

This HP laptop packs a legit Intel Celeron processor, ample 320GB of storage, Altec Lansing speakers for some solid multimedia playback, Wireless N for the fastest in WiFi connectivity, and an LED-backed display (the absolute latest tech!). Since it’s a full-sized laptop, there are no worries about a cramped keyboard or a tiny display—no squinting here!

Keep in mind that this computer is entry level in specs, and the 2GB of RAM could probably use an aftermarket upgrade (I personally love Crucial.com – their RAM is reliable, fast and their front-page Memory Advisor makes it simple to locate the RAM you need). A 4GB upgrade, which I’d recommend at a minimum is around $23, the full-on professional 8GB upgrade is a reasonable deal at $45. 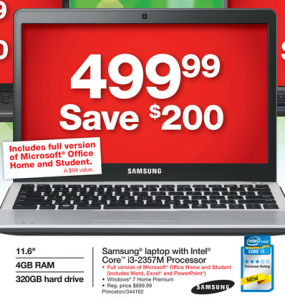 Don’t let the price fool you—while $499 may seem low to call a ‘heavyweight’ this laptop is SCREAMING. The Core i3 processor is Sandy Bridge, Intel’s latest and greatest tech. Unlike some cheaper offerings, the Samsung Series 3 line of laptops are built solid and will last for years to come. This is a solid name-brand laptop that I would buy a dozen of for my business in a heartbeat. Plus it comes with Microsoft Office pre-installed, so you’re saving over $129 for your business by choosing this model over competing laptops.

Let’s start with the size: it’s a 11″ laptop, so it’s actually smaller and lighter than our lightweight. But don’t let the size fool you—this is not a netbook and it’s no cheap looking plastic laptop but the real deal! It features a full-sized chiclet-style keyboard so you aren’t sacrificing to get the ultimate in mobile productivity, you’ll feel just as comfortable typing on this machine as it’s larger friends. It’s a mere 0.87 inches thin, and only 2.84lbs so it’s slick, and ultra-portable—the kind of laptop you buy to make clients jealous. But that doesn’t come at the sacrifice of battery life: the included 4-cell should last about 6 hours of real-world use.

The media features are killer too: an HDMI port means you can use this to power your television or projector with a single cable and at high-def resolutions inlcuding 1080p. Top-notch audio means you’ll be blasting tunes and pissing off your coworkers all day long. The webcam means Skype conversations your clients will rave about. And the LED-backed screen in high-res 1366 x 768 with Intel HD graphics mean you’ll enjoy games and HD media playback without breaking a sweat.

This laptop is the real deal for the ultimate in mobile business, and you’re making a huge mistake if you don’t at least go in store to a Staples and try it out. Unlike a lot of cheaper laptops being sold this holiday season, this isn’t a product that cuts corners—it’s a steal at $499. 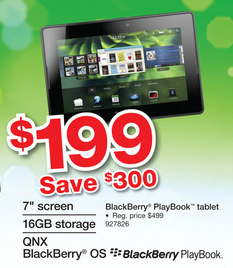 Readers of this blog know how important a tablet computer is to mobile productivity, and deals on tablets at Staples are no slouch. If you read my BlackBerry Playbook review earlier this year you know that while it’s not an iPad-killer, it’s a great size for portable productivity and the perfect companion to a BlackBerry smartphone.

While it was a bitter pill to swallow for it’s launch price, at $199.99 you’re getting the real McCoy with 16GB of storage, front- and back-facing HD webcams, and one of the most gorgeous screens seen on a tablet. Throw in some amazingly innovative apps and you have a great deal on a fully-featured tablet.

But Mommy, I Want Android! 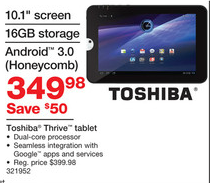 What’s that? You’re an Android gal? With all the awesome apps for Android and the flexibility the platform brings, I’m not surprised. What to look for when thinking about an Android tablet? First up, one word: Honeycomb. Android’s 3.0 version, nicknamed Honeycomb, is the real deal—a version of Android designed specifically for the tablet form factor. Anything else is just a phone operating system grafted onto a tablet-sized device. So stay the hell away from all those other “Android tablet” deals at other stores for $99 or less and get a real device. After all, your productivity is at stake!

Staples is bringing the fully-powered, dual-core, 10.1″, HONEYCOMB tablet by this little company you may have heard of… Toshiba. That’s right, this is a name-brand, full-sized, fully-featured tablet on sale all day Friday and Saturday at Staples for not $499, not $399, but $349.99. How is Staples even making any money on these deals? I have no idea, but I’m glad they’re passing on the savings to us.

Let’s face it, we just can’t carry enough books, printouts, manuals, etc. anymore. Every time you try and pack all the paper you need into a case, you realize you just can’t find that one thing you really wanted to read. So frustrating. I can’t recommend a specific device to you because eReaders are personal devices you’ll want to take with you everywhere, so in order to decide on which one you want (eInk or full color? WiFi-only or 3G?) you’re gonna have to go in-store to a Staples and play with them all. Still can’t decide? Staples has an eReader Research Center that’s the perfect place to compare devices and figure out what you need.

No matter what you choose, Staples is the perfect place to buy since they’re offering gift cards with every purchase, like a $15 card with a $79.99 Kindle WiFi, a $25 card with a NOOK Color, and $20 gift cards each for the NOOK Simple Touch ($99) and the Kindle Touch ($149). These are the best prices you’re gonna get anywhere, and the Staples gift card is just icing on the cake. 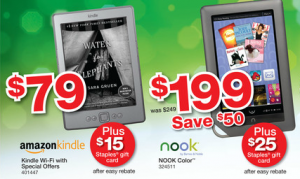 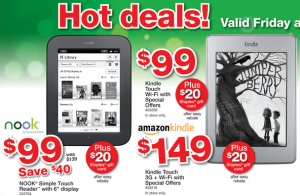 If you’ve got a fast, ultra-light laptop then you know how much of a premium storage space is. While your desktop might store terabytes of data, you probably have far less than that available when on the road. That’s why it’s crucial that you make sure you have portable hard drives available to store all of the important files you just can’t fit on your netbook, ultrabook or MacBook Air. The first problem is figuring out how much space you need. 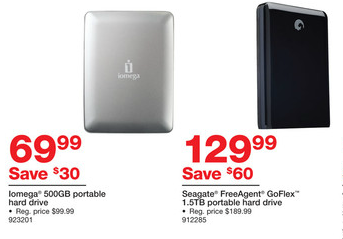 If you’re finding that the space on your hard drive is adequate but you just need to tote around some larger media files occasionally, the Iomega 500 GB portable hard drive is perfect. It’s a small package at an outstanding price, only $69.99.

For those who need flexibility and larger storage, there is no better portable drive on the market than the Seagate FreeAgent GoFlex 1.5 TB drive for $129.99. When people ask me for a personal drive recommendation, the Seagate GoFlex is my number one. Why? GoFlex technology is designed to grow with you. Need to change your USB drive into a Firewire one to boot off your Mac? No problem, just buy the Firewire adaptor. Know that you’ll want to upgrade to USB 3.0 next year but don’t want to have to buy a brand new drive? That’s cool too, since you can just buy a USB 3.0 adaptor when your computer is ready. The flexibility and future-proofing of these drives is incredible, and you really can’t go wrong with this purchase.

No mobile lifestyle is complete without some hot accessories. Staples is bringing some great deals on the little things you just have to own but dont want to spend an arm and a leg on.

No mobile professional should be allowed to leave the house without all their files on a flash drive. I know, I know, cloud storage is taking over, but you can’t get your files from the cloud if you don’t have Internet access! So sometimes you have to do things the old fashioned way. 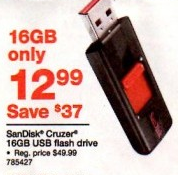 Staples has a good deal on an 8GB for under $9, but with the size of files growing year-by-year (a Blu-Ray rip can easily top 40GB these days) nothing less than 16 GB is acceptable in 2011. We’re talking about twice the storage for a few extra bucks. Also you need to go with a name brand. Don’t buy a flash stick from some company you’ve never heard of, you’re going to be storing files that you absolutely can’t lose. Reliability is key. That’s why I think this $12.99 SanDisk Cruzer 16GB USB stick from Staples is the perfect pick up for Black Friday. SanDisk is well known and I’ve been using their flash drives for years and I’ve never had a single one die on me *knocks on wood* 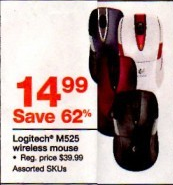 One thing you need to keep in mind when buying Black Friday laptops is that you’re probably not getting a world-class trackpad for under $500. So there’s no reason you shouldn’t walk out of Staples with a mouse to go with your HP or Samsung laptop. If you’re buying a mouse this year, cut the cord and go wireless, don’t be stuck plugging and unplugging a rodent in front of clients. A cheap but solid performer from a company you know, Logitech, is on sale at Stapes—they’ve got the Logitech M525 Wireless Mouse for only $14.99.
These are our top picks, but when you’re in store on Friday and need help, who do you turn to? Don’t worry, the Small Biz Go Mobile team is here for you—Mario Armstrong himself and web editor Shy Mukerjee will be on SiriusXM from 9-11am EDT Friday taking calls and helping you get the hottest tech. So call our live Black Friday Help Desk at (866) 801-8255 and we will answer the call live on SiriusXM ch. 128.