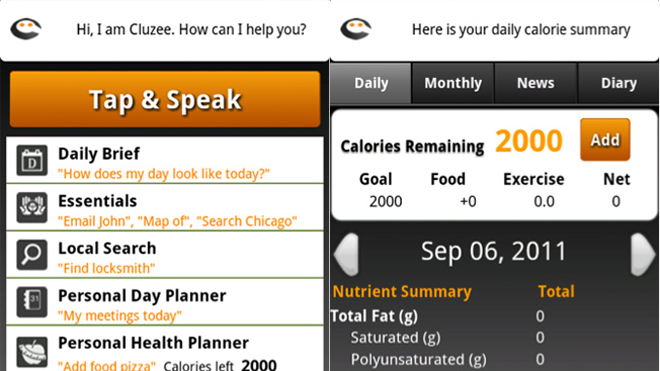 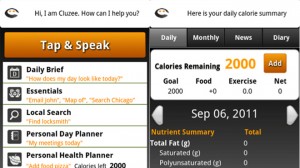 Since the debut of Siri, the voice-controlled virtual assistant included with the iPhone 4S, there has been a race to offer the same capability on Android devices.  The latest attempt, Cluzee, seems to be creating buzz as an app that might equal (or even surpass) Siri’s offerings.  However, can Cluzee really surpass Apple’s electronic Jeeves?

The buzz around Cluzee is due to the fact that it offers a few flashy features that Siri doesn’t, like providing driving suggestions for the locations of upcoming calendar appointments. Cluzee also provides the standard range of personal assistant magic tricks, including a list of “essentials”, “local search”, a “personal day planner”, “personal health planner”, and “personal radio”.

On my initial review of the app, I was specifically interested in the personal health planner.  During the holidays it can be extremely helpful to track calorie intake, but I’m usually too lazy to write down everything I eat. The personal health planner allows you to simply say “add food: pizza” and log it in your daily intake list.  You can also set a calorie limit for the day that slowly reduces as foods are added, giving you a “calories remaining” balance.  The demo video shows that asking Cluzee a simple question like “what does my schedule look like today?” will yield a spoken rundown of the user’s calendar, which could be very useful when multitasking.

However, as evidenced in this video from Android Central Cluzee isn’t the Siri-surpasser that Android users may hope for.  First off, accessing Siri is as simple as a long hold to the iPhone’s home button.  In comparison, Cluzee runs like a regular app and needs to be accessed each time from the app dashboard, and has a not-insubstantial load time.  The beauty of a voice-powered personal assistant is that it’s faster to speak to it than to type in the actions yourself.  By the time this assistant has booted up, it may have been easier to just type in the appointment or Google for directions.  Also, using Cluzee isn’t quite intuitive yet; Commands like “find pizza” go unrecognized.  So, while the idea of a robot “gal Friday” might be appealing, it’s probably not yet the time to replace your assistant with an Android app.