One new software trend that’s been taking the Internet by storm as of late is something that massively benefits both consumers and software producers—bundles. By bundling together different software packages and offering them at a steep discount, often far more copies of programs can be sold at much, much lower prices than consumers would otherwise have to pay. 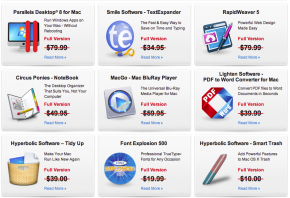 Take Nova Development’s new spring Mac SuperBundle. They’re offering the latest version of Parallels Desktop, an excellent virtualization software that lets you run an entire Windows Vista, 7 or 8 instance inside your Mac, without having to reboot your computer! For those who need to run the occasional Windows app but don’t want or need the full Windows experience, Parallels Desktop is the perfect solution. While the software usually retails for $79 alone, the SuperBundle gives you a copy of Parallels for just $49, while also bundling some other interesting apps that may be of use to your business. While I’ve used Parallels extensively and can definitely vouch for it, I’ve had much less experience with some of the other software below, though I will share some thoughts on why it helps to make the whole thing a great deal: 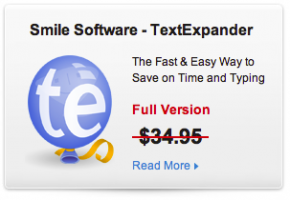 For those who often do repetitive tasks involving lots of text input on their computers (and let’s face it, who doesn’t?), TextExpander is one of the greatest little Mac Apps to help you save time and be more productive. Basically, TextExpander let’s you type in shortcut phrases and then it expands them out into longer pieces of text. Type, say “;web” and TextExpander will automatically insert your full website address, i.e. “http://marioarmstrong.com”. Other uses include setting up quick shortcuts for multiple email signatures, or email responses you have to write often to clients or customers. Basically any repetitive task you find yourself doing regularly as part of your work can be automated, at least in part, by TextExpander and the best part is that it works system-wide so it works seamlessly no matter where you’re entering text! 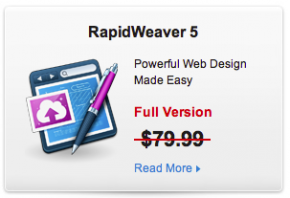 Every business needs a website, but not everyone can afford to drop the $399 Adobe asks for their Dreamweaver web design app, especially businesses that are unsure if Dreamweaver is even the right fit for their organization. RapidWeaver, normally $79 but included in the cost of this bundle, offers a lower cost and less complex alternative, bundling 45 themes as well as all the tools you need to get a corporate site up and running, including blog and slideshow software.

Other apps in the bundle include a ton of other useful software. “Font Explosion 500” is a collection of royalty-free fonts your business can put to use right away. There’s a PDF to Word Doc conversion app, one called “Tidy Up” which helps to keep your Mac’s hard drive clean, a blu-ray player, and a funky-looking Desktop Organizer app called NoteBook by a company with the hilarious name “Circus Ponies.” While these apps may or may not prove useful, it’s cool that you get such a wide selection of apps for one low cost.

The Mac SuperBundle is only available until midnight on Wednesday, May 15th, so don’t delay—check out the bundle today!.