Is It Time for Smart Watches? 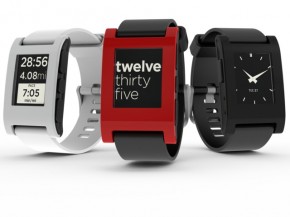 Just a few days ago, TechCrunch reported that Samsung has filed trademarks indicating that it may be entering the burgeoning smart watch market. With this news, it joins the ranks of other companies rumored to be developing smart watches: Apple, Google, and Microsoft all allegedly have watches in the making.

Interestingly, this emerging wearable computing market has been driven by small players—perhaps most famously by Pebble, a smart watch that was crowd funded through Kickstarter. But with these bigger companies moving in, it’s worth reviewing the smart watches on offer and asking whether this newest tech trend has something to offer you.

The tagline about smart watches is “hands-free computing.” The general idea is that the watches will wirelessly connect to your smart phone and move some of its functionality out of your pocket and on to your wrist. If you ever get furious about having to take the phone out of your pocket to make a call, check your messages, or read a text (or, for that matter check the time), then these might be products for you.

If that seems silly, keep in mind how everyone thought that the iPod (and mp3 players in general) were useless and that they’d never take off. Almost every reviewer has recognized the advantages in terms of convenience and connectivity of having a device that’s more accessible on your wrist.

Pebble has maybe gotten the most hype of any smart watch manufacturer, due in part to having been funded on Kickstarter. We even got a chance to interview the CEO of the company last year. Pebble worked hard at having a fashionable looking watch (tho’ whether it’s your style is up to you), it’s not quite as nerdy looking as some of the other offerings

Pebble offers support for both Android and iOS phones, offers about a week of battery life without a charge, connects to your phone through Bluetooth 2.1+EDR and 4.0 Low Energy, and uses an e-Ink screen that appears to be pretty legible under sunlight, though there have been reports that the ambient light sensor can be finicky. Interestingly, too, the Pebble has its own API for developers to make watch-specific apps, tho’ the current offerings are still quite limited.

MetaWatch beat Pebble to the market, and most likely, Pebble learned from some of the missteps of their watch, the Strata. Less “design-y” than the Pebble, the main screen provides a lot more information at once, like stocks, weather, and the like. But generally, the Pebble appears to be a little easier to use and a little more dependable.

Like the Pebble, the Strata uses an e-Ink screen, but the screen is reflective, which some users have found difficult to read in direct sunlight. The MetaWatch will connect to your Android or iOS device using Bluetooth 4.0 with an advertised battery life of 5-7 days. MetaWatch is also actively soliciting developers to write native apps for the watch, tho’ there doesn’t appear to be a real market for them yet.

It’s not just the small companies that released a smart watch. In fact, Sony was first out the gate with their aptly named SmartWatch and just released an update, appropriately called the SmartWatch 2. The only one of these watches with a color screen, in many ways it also seems the most developed. Unlike the above two watches, the SmartWatch2 is integrated to receive notifications from Twitter and Facebook, as well as a variety of other interesting features: you can take pictures remotely, control slideshow presentations, and more.

Unfortunately, the SmartWatch 2 is only compatible with Android-based phones, which limits its usability. It connects to your phone via Bluetooth 3.0 and also has NFC (near field communications) capabilities. Sony also advertises that its smart watch has the longest battery life of any competitor, tho’ its specific claims are 5-6 days of life with low usage and 3-4 with typical usage.

If I were in the market, I’d look closely at the SmartWatch 2 and the Pebble. Or just wait—besides maybe the Microsoft, Google, and Apple offerings, there’s another Kickstarter-funded watch called the HOT watch that looks promising. But right now, these products are mostly geared to early adopters or people that just hate fishing for things in their pockets. It remains to be seen whether we find the added convenience of having data on your wrist is worth the cost. Only time will tell.