iOS 8 is coming this fall to iPhone & iPad: Here is what you need to know

At their annual Worldwide Developer Conference (WWDC) in San Francisco today, Apple announced the latest version of their mobile operating system, iOS 8. Coming this fall, iOS 8 offers a bunch of upgrades that should make life for iPhone and iPad users a lot easier. Here’s a look at all the features you’ll want to know about!

All of your photos on all your devices

A common frustration amongst iPhone users especially is that you’re never quite sure what the heck is going on with your photos. Sure, they’re supposedly backed up in iCloud, but if you’ve ever tried to access your photo stream from a Mac or iPad you’ve probably noticed that only your most recent 1,000 photos are backed up. That number sounds like a lot, until you realize that you’ve probably got thousands, if not tens of thousands, of photos on your device.

Unless you’re the kind of person who still regularly connects their phone to their computer to back it up with iTunes (and who does that any more?) a lot of those photos are, sadly, not backed up and if you lose or break your iPhone you’re out of luck getting them all back.

Now, all of your photos are backed up to iCloud—assuming, of course, that you’ve got the storage space available to handle them all. While you still get 5GB of iCloud storage for free, you might have to pony up some cash to get all those photos and videos in the cloud. Thankfully, Apple has dropped their prices on iCloud storage—you can get 20 GB for just $0.99 a month, or 200 GB for $3.99. That last option is several times the size of any iPhone storage currently out there, and so it should more than satisfy even the most demanding mobile photographer.

iOS 8 has some fun tricks up its sleeve for the Messages app. With new, integrated buttons that make sharing voice messages, pictures and video easy to do straight from the app, Messages is getting a big multimedia upgrade.

New, too, is an ability to share your location right with someone you’re messaging, straight from the Messages app. You can see where everyone in a group chat is as well, provided they’ve enabled sharing on their own devices.

Ever been stuck in a group chat that you don’t want to be notified about any more? You can hit “do not disturb” and stop getting messages, or you can take yourself out of the group! 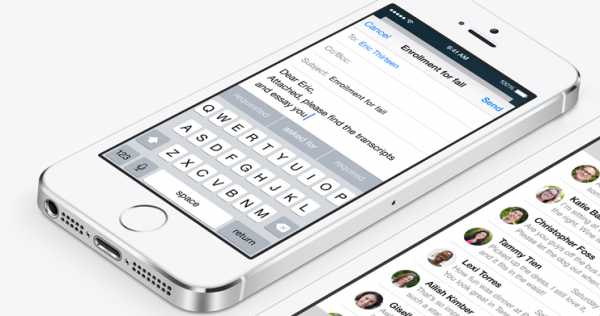 Taking a pretty big hint from Android, the default keyboard in iOS 8 gets predictive text options that learn from how you communicate with different people so it can offer context sensitive suggestions as you type. Do you use slang with friends but fancier words with work coleagues? Your iOS device will pick up on these nuances automatically and incorporates them into the suggestions!

One thing I like is that Apple keeps this information private. Although it has to scan and learn from all the text you type, this information is stored on your device, not uploaded to the cloud. 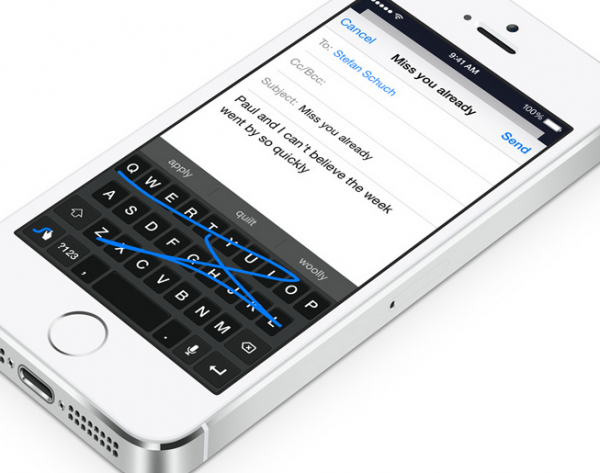 Install any keyboard you want

That’s not all for keyboards or borrowing ideas from Android—you can now install any keyboard you want on iOS! While there weren’t too many details, they did show off what looked to be the popular Swype keyboard running on iOS 8. If you’ve been looking for alternative keyboard options on iPhone or iPad but have been deterred in the past, this is one feature that might bring you back to Apple.

The rumors were right—Apple is making a big play in the mobile health space by offering their new “Health” app with iOS 8. Basically, the app will serve as an aggregator for all the data from the health apps you’ve got installed and the device you’ve paired with. Including apps that track your movement, workouts and food consumption as well as devices like heart-rate monitors, diabetes testing, and smart scales, Health will be a one-stop shop for the current state of your health!

Simultaneously, they’re launching “HealthKit,” a new cloud platform that will live behind the Health app and provide a way for developers of these 3rd party apps to get their data into Apple’s new system.

Apple also teased a deeper integration they’ve developed with the Mayo Clinic and a way for your phone to automatically contact your doctor if any of your vital signs fall outside of certain parameters.

These are just some of the new features coming in iOS 8, and you can read more about all of them on Apple’s Website. While it’s not the radical change that iOS 7 was when it came out last year, these are all great features that will help you do even more if you’ve got an Apple device.