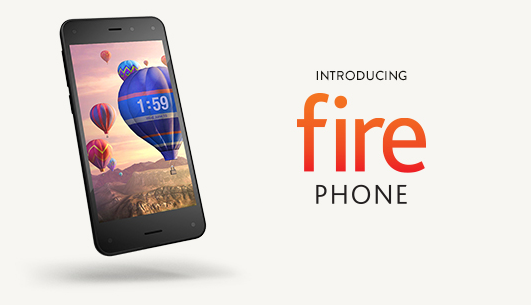 Amazon Fire Phone: For People Who Like to Buy Things (From Amazon)

After months of speculation, at yesterday’s special event in Seattle, Amazon’s Jeff Bezos took to the stage and unveiled their Fire phone.

It’s got 4 cameras that track your head at all times to offer an immersive 3D experience. It’s got 24-7 support from live human beings you can get to in under 10 seconds by hitting the “Mayday” button. And it makes it really, really easy to scan a real-world object and then immediately buy it from Amazon.

With the iPhone, Apple offers a secure platform that’s easy to use. They’ve got the best apps, arguably the nicest looking hardware, and amazing cameras. If you can afford an iPad and a Mac, too, then with the upcoming iOS 8 operating system, it’ll be easier than ever to get a seamless experience as you switch from one device to another. By building their hardware AND software, Apple can offer an integrated experience to it’s customers across all of their devices.

Google, meanwhile, has Android: an operating system that any smartphone vendor can take and build upon. Android has tons of features baked in that Apple devices are only just catching up to: apps can easily talk to one another and share date. You can install any kinds of widgets, background services, keyboards, lock screens—almost anything you can think of, you can do with Android. It’s super customizable and extensible, which opens it up to a lot of mobile malware but also a lot of possibilities. Plus, if you’re a big fan of Google’s apps like Gmail and Drive, you’ll always get the best possible experience on Android devices.

So that leaves us with one big question: what’s Amazon’s unique differentiator with the Fire Phone? Their message was pretty clear: if you love shopping on Amazon, you’ll love this phone. First they’ve got “Firefly technology” which can scan real-world objects in mere seconds. On stage, they showed this working for telephone numbers, website addresses, songs, movies, and TV. It is those last three that really appeal to Amazon, since once you’ve scanned, say, a song you can instantly buy it on Amazon or create a streaming radio station based on that track. Scan a movie and you can see actors, plot details, and other content from IMDb or, of course, add it to your Amazon Prime video watchlist or buy/rent the movie right then and there. You can also scan household items, books, CDs, DVDs, video games… are you noticing a trend here? These are all things you can buy on Amazon.

Helpfully, Amazon even includes a dedicated camera button that launches the camera quickly even if the phone is in standby, and this button doubles as a Firefly button, allowing you to pull something out, scan it, and buy it, all in a flash.

To sweeten the deal for Amazon’s biggest fans, and to make it even easier to buy things from the company, they’re including a free year of Amazon Prime, the service that gives you free 2-day shipping on all your Amazon purchases as well as access to their movie and music streaming services. This is a limited-time offer, but they don’t say when it will expire.

This is perhaps their hardest sell, however. While the Fire Phone can do X-Ray for Movies and TV just like the Fire TV and tablets can, the underlying experience can be lacking in several ways. While Amazon instant video offers tons of free movies and TV shows to Amazon Prime customers, their library lacks the depth of movies that Netflix has and the depth of TV shows on Hulu. While their Amazon Music streaming service boasts 1 million songs available from artists you’ve heard of, Spotify, Beats Music and Rdio offer more like 20 million songs.

If you’re a Kindle fan, you might like that they’ve brought their immersion reading technology to the Fire Phone, and they promise you’ll be able to see the screen to read in sunlight, even while wearing sunglasses, the $69 eReader-only Kindle is still the best experience for book lovers.

Amazon can offer some of the cheapest cloud storage available to consumers (since they have an entire cloud computing company, called Amazon Web Services), and they’re taking full advantage by backing up, for free, ALL of your photos from the Fire Phone as well as up to 5GB of your videos and other documents. This is awesome, but if you’re already storing your photos in Dropbox’s Carousel, Apple’s iCloud, or Google’s Drive or Picasa, you might not be thrilled to start storing your photos in a second, 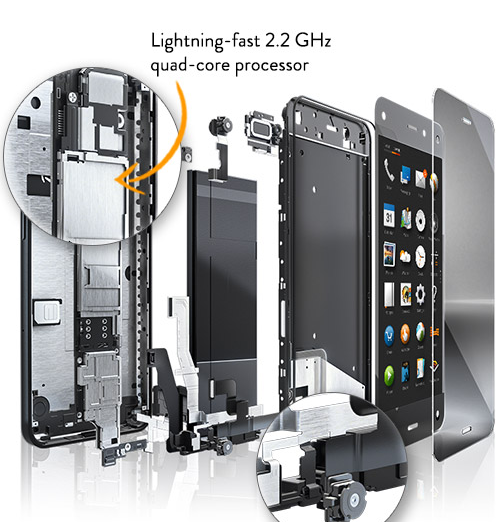 Fire Phone has got a pretty big screen at 4.7″, which should appeal to you if you like watching movies. It’s speedy, too, with a 2.2Ghz quad-core Snapdragon 800 processor, 2GB of RAM, and an Adreno 330 graphics processor. This is exactly the same as the Kindle Fire HDX tablets Amazon makes, so if you’ve tried those out before you’ll know what to expect. 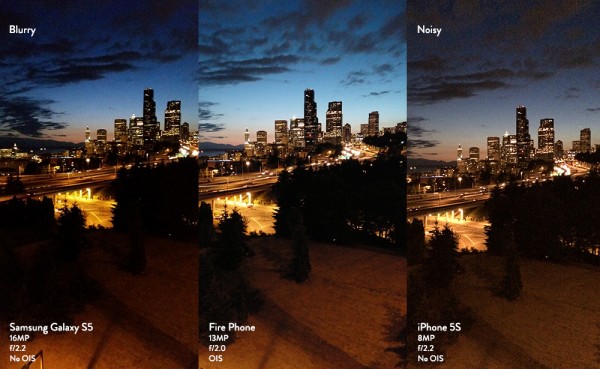 The 13MP f/2.0 camera has optical image stabilization, which takes better night pictures than the iPhone 5S according to Amazon. We’ll have to see how that holds up in real world testing, though. With their so-called “advanced power management technology,” Amazon promises up to “285 hours of standby time… 22 hours of talk time… 65 hours of audio playback, and up to 11 hours of video playback” which sounds great, but, again, we’ll have to actually test the device to see.

What’s up with the price?

Amazon is known for saving consumers money and always trying to offer the best deals on a wide variety of products. While their Kindle eReaders started at $399 when they first launched, the lowest end model is today available for $69. Their Fire Tablets similarly undercut the competition, using “special offers” (i.e. ads) to offer higher end hardware than their Android-based competition at significantly lower prices. Compare the cost of a 7″ Kindle Fire HDX ($229) to the iPad mini ($299 or, more comparably, $399 with Retina display) and it’s easy to understand why Amazon is having so much success with these devices.

But the Fire Phone? It’s priced exactly like any other high-end smartphone, including the Samsung Galaxy S5 and iPhone 5S by starting at $199 on-contract at AT&T, or $649 without a contract. While Amazon offers 32GB of storage compared to Apple and Samsung’s 16GB for that $199 price, it still has the same hit on your wallet.

If Amazon can find a way to bundle “special offers,” with the Fire Phone, this price might come down a bit in the future, but don’t hold your breath quite yet. While special offers can shave $15-20 off the cost, that’s not enough to bring this phone into “budget” territory. The only other place I can see Amazon saving money is getting rid of all those cameras, but that’s a huge selling point for them and I don’t see that going away any time soon.

For die-hard Amazon customers, the features like Firefly , X-ray, Immersive Reading, and the cloud storage will certainly help move devices, but for everyone else (and especially anyone more interested in getting WORK done on their phone and not just PLAY) Amazon doesn’t have a compelling reason to drop $199 yet.

My verdict? If you’re really interested in the Amazon Fire Phone but think you can wait, give it some time to see if the budget retailer can figure out how to get that price down into a more wallet-friendly range.