The long-awaited, almost out of beta, Google Chrome OS that only uses applications from the web just got closer to becoming to reality as developers, major brands, and some lucky consumers will receive their plain-looking CR-48 notebook with the new fully functional operating system from Google in the coming days/weeks.

Chrome OS is a web-only OS in the sense that there are no applications/software to download. All applications are only available from the Google Chrome Web Store that will launch alongside the Chrome OS with all of your documents/data stored in the cloud. Additionally, the notebooks Google plans to mass produce will not have media drives or hard drives at all (Solid State Flash drives will act as primary storage). The idea is that notebooks running Chrome are to be lightning fast and have longer-than-your-average-computer operating/standby times.

Users will get all the benefits of Chrome notebooks: 10-second boot, fast web app performance, and built-in 3G and Wi-Fi. And none of the headaches of ordinary computers. 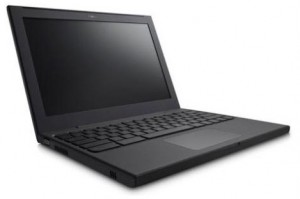 In other words, Google Chrome OS and the notebooks it plans to mass produce is practically a shell with just enough guts, and a web camera to get you connected to the net and producing – no booting up and no wasting time.

As I stated before, Chrome OS is still in beta, but will make a debut sometime in 2011. The minimalistic, always on, and always connected Google notebooks, or those produced by other manufacturers, will also be available around the same time frame.

Google isn’t the only company with some serious time, effort and money thrown into the future of cloud computing. More and more companies are offering cloud solutions that allow ease of use/accessibility at a very reasonable cost to the consumer.

My suggestion to you is if you have reservations about cloud computing/storage, I suggest you read up on the subject and figure out how you and your business can effectively use it to your advantage…because it isn’t just a fad and it isn’t going anywhere anytime soon.