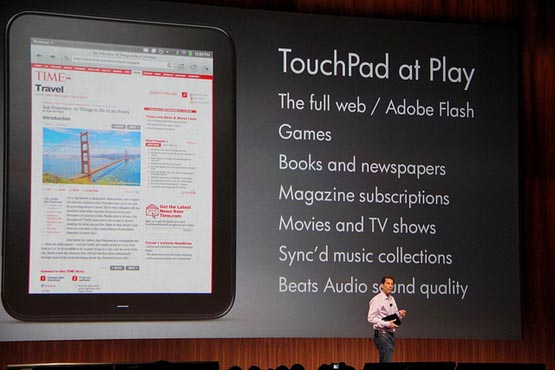 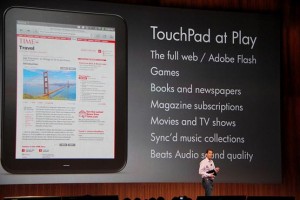 Last Friday, I wrote about HP’s massive discounts on its Touchpad tablet, and speculated about how these promotions might be the opening volley in a tablet price war.  The article sparked some discussion around the SmallBizGoMobile newsroom, with my editor arguing that the Touchpad can’t measure up to the iPad, and therefore deserves a correspondingly lower price.  It would seem that a number of consumers agree with my editor, as John Paczkowski over at AllthingsD points out that Woot sold only 612 Touchpads during its one-day promotion, while the deal-of-the-day site sold 2,288 Motorola Xooms just a few weeks ago (to be fair, though, most Wooters are pretty savvy shoppers, and since Staples was offering the Touchpad for only $300—$80 less than Woot—it’s likely that most consumers chose the Staples deal).

My enthusiasm for HP’s aggressive Touchpad promotions was rooted not in some partisan love for the Touchpad itself (full disclosure: I haven’t even touched a Touchpad yet); rather, I’m excited to see that HP is taking proactive steps to increase WebOS’s marketshare, as the company is singularly capable of breaking the iOS/Android duopoly in the smartphone and tablet markets, and that would be a good thing for everyone (except, perhaps, Apple and Google).

Earlier this year, HP announced that it would be bringing WebOS to its laptops, desktops, printers, and “some form factors you haven’t seen before” in late 2011 and early 2012.  This means that the world’s largest manufacturer of laptops and desktops (globally, it sold over 14.5 million PCs in the second quarter of this year alone) will be shipping a cloud-based, fast-booting, Linux-derived OS alongside Windows on nearly every computer rolling out of its factories.  While the rumor mill has been reporting that HP is in talks with other manufacturers to license WebOS, the penetration HP will achieve simply by placing WebOS on its own PCs will likely prove sufficient to make WebOS a viable platform for at least the next few years.

Here’s why: You don’t need to be a tech analyst to know that, with every major update, Apple is slowly moving towards its (as yet unspoken) goal of merging iOS and OSX into one single operating system.  Likewise, there’s been speculation that Microsoft is moving towards a similarly integration of its desktop and mobile offerings.  For both companies, this merging of mobile and desktop is going to be a slow, difficult process (perhaps less so for Apple, given its savvy refusal to provide legacy support), and that’s where HP has the potential to make a sharp, early impact in the market.  At its name implies, WebOS uses web-based protocols for many of its processes and applications, which should make it quite easy to provide users with a unified experience—and unified access to their files and information—across multiple devices.  Though WebOS was designed for touchscreens, it should easily scale to desktops and laptops, provided HP’s development teams are given ample enough resources.

And herein lies the rub: former HP CEO Mark Hurd (who was ostensibly ousted due to a sex scandal) essentially spent his four-year term acting as though he was from a private equity firm, slashing, among many other things, the company’s R&D budget from 4% of its total revenue to only 2.5% (though, to be fair, this trend began under his predecessor, Carly Fiorina, who became CEO in 1999, when the company’s R&D budget was 5.8% of total revenue).  In large part, HP fought its way to the top of the PC manufacturer pack thanks to its innovative R&D work, and it’s something a little short of amazing that the company has managed to maintain its dominant position in recent years given its near-abandonment of internal research and design projects.

The company’s WebOS strategy not only represents a return to the company’s roots, but also signals that current CEO Leo Apotheker and other top execs have a clear understanding of the medium-term trajectory of the PC and consumer electronics markets, and that they’re willing to exert considerable resources and court considerable risk to keep HP at the head of the curve.  Few reviews criticized the Touchpad’s hardware and build quality; rather, most complaints were levied against the performance of the WebOS 3.0 software, which was designed exclusively for tablets (current WebOS phones run a different version of the OS).  No one likes an underwhelming product, but keep in mind that HP purchased Palm a little more than a year ago, so the fact that they were able to bring a functional, viable tablet product to market so quickly is really rather impressive (consider the difficulties involved with integrating Palm’s corporate structure into HP’s, training HP engineers on how to use/program WebOS, and then producing a detailed development roadmap).

HP has a stronger retail presence than any other PC maker out there; sure, they don’t have bespoke stores like Apple, but HP computers are available in every Best Buy, Staples, OfficeMax, and Wal-Mart throughout the country.  In a year’s time, when a customer shopping for a new computer enters Best Buy, they’ll encounter WebOS as a value-added option that will differentiate HP’s offerings from the likes of Acer and Dell. WebOS will become a stand-alone, intuitive OS that will allow them to use their desktop like a tablet, when they want, while still allowing them the full productivity and functionality of the Windows ecosystem.  Sure, right now WebOS’s app store offerings pale in comparison to those of the Android and iOS app stores, but if, by the end of 2012, there are over 60 million devices running WebOS, you better believe that app developers will be there to greet the new users.

HPs WebOS strategy is important, not just for HP, and not just for WebOS, but for what it means for the larger PC/CE industry.  By placing WebOS on nearly every devices they sell, HP has the opportunity to:

(a) distinguish their products in the market

(b) create a coherent, usable cross-category interface—something that even Apple hasn’t pulled off yet, and

(c) potentially increasing margins/lowering prices by breaking free of MS’s licensing fees (if WebOS should eventually prove successful enough to offer as a stand-alone OS on desktops and laptops).

There’s really no other gambit this big being played by any other PC manufacturers right now, and even if it ultimately results in nothing more than under-baked products being liquidated via Woot, HP’s newly rediscovered ambition to innovate should be applauded.