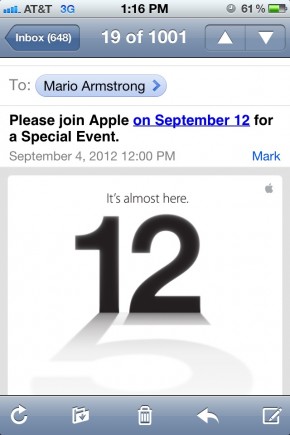 Today Apple confirmed what we’ve all been thinking (and assuming): they will hold their big press event to introduce the new iPhone 5 on Wednesday, September 12.  Journalists and press outlets received the official invite today, which said “It’s almost here.”  The event is being held in San Francisco, California, and will kick off at 10AM Pacific/1PM Eastern.

Not to worry: we will have in-depth coverage of the iPhone 5 announcement as it happens, as well as hands-on testing ASAP.

It’s likely this event will only talk about the iPhone 5. According to rumors, Apple is planning a second event in October to announce updates to the iPad. That’s also where we’ll probably see the rumored 7″ Apple tablet (aka “iPad mini”) designed to compete with the Google Nexus and Kindle Fire. As a point of comparison, last year’s iPhone 4S announcement was held in early October.

It’s likely that the 4S will also see a price reduction similar to the way the iPhone 4 has been marked down now that the 4S is available. For example, AT&T currently has the 8GB iPhone 4 available for $99 with a 2 year contract.