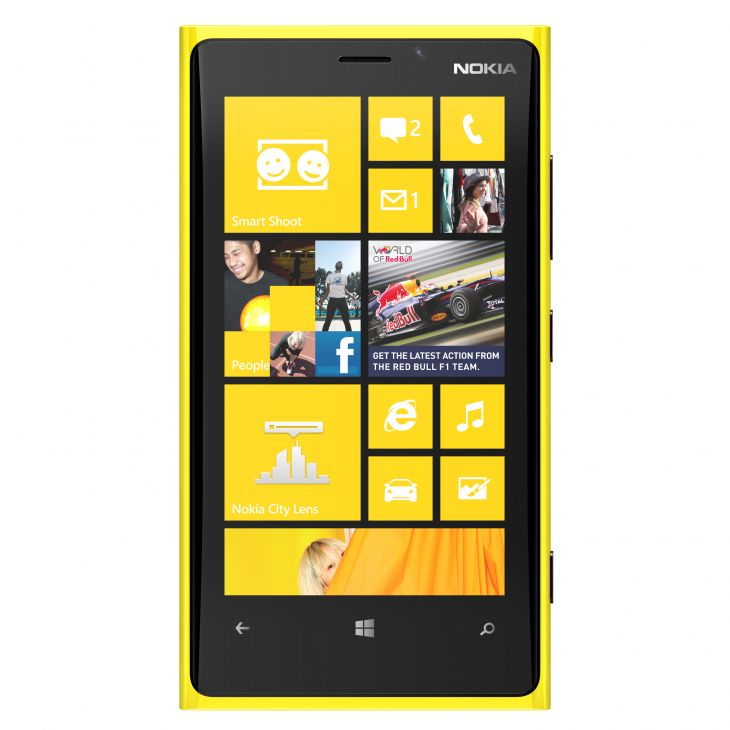 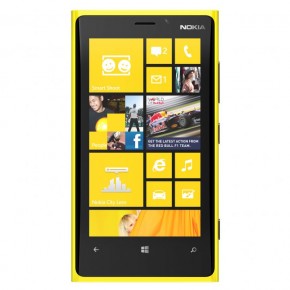 This is a big day for Nokia, and all the heavy hitters are here from Nokia CEO Stephen Elop to Microsoft CEO Steve Ballmer, to introduce the latest and greatest in their collaboration on Windows Phones. The Lumia 920, the newest phone in Nokia’s Lumia line, is the de-facto flagship device for Windows Phone 8. While pricing and a release date have yet to be announced, the phone (shown off prominently today in yellow, as seen at right) is coming in Q4 and packs a ton of improvements over the previous Lumia 900 we first saw at CES back in January. 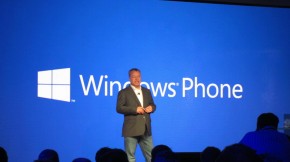 According to Elop, Windows Phone is growing, and fast. Their Marketplace today boasts over 100k apps, a huge number in comparison to the few thousand we saw just a year ago. Big name apps are here too, like CNN, ESPN and EA. Combined with the Xbox music, video and games, the Marketplace is finally starting to shape up.

One year from now, we should see close to 400 million new devices running these operating systems
-Steve Ballmer 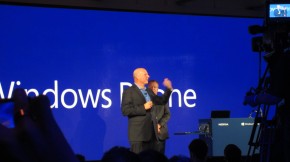 But it’s not just number of apps—plenty of AAA titles that we rely on Apple’s iPhone App store and Google’s Play store simply don’t exist on Windows yet. And then there’s the problem that nobody is developing apps for Windows first (can you even imagine a company like Instagram launching today with support for only Windows Phones?) but MSFT head Steve Ballmer says that’s about to change. According to Ballmer, 400 million Windows 8 and Windows Phone 8 devices (phones, tablets, slates, laptops and desktops) will be in consumer hands in the next year. While the vast majority of those devices will surely be laptops, dekstops and slates running either the full Windows 8 experience or the ARM-only Windows 8 RT experience, Ballmer notes that Microsfot has spent a ton of time making sure that there’s a consistent “developer platform” and that the store will work “in a common way to both Windows 8 and Windows Phone 8.”

The combination of Windows 8 on tablets, netbooks, ultrabooks and PCs with Windows Phone 8, and those two sharing a commond developer platform, is apparently key to Nokia’s success here in this space. Ballmer closed his brief remarks with a rather bold prediction, that the “next app developer to hit it really really big will be on Windows.”

Of course, what Ballmer didn’t say is that this would necessarily be on the Windows Phone OS. We might still be waiting for an Instagram-level success on the WP platform. 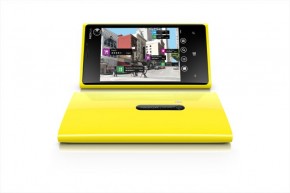 Just like the Lumia 900, the 920 boasts an even more impressive camera. It sits flush with the frame of the phone, with no bump protruding like on some Android devices, and integrates a flash and technology Nokia is calling “PureView”. Though a marketing term, Nokia is looking to tackle two major problems, lighting and “fiddling with settings.”

From a technical perspective, the biggest innovation is mechanical image stabilization. Rather than digitally stabilizing images in software, the entire camera assembly is built on springs so it reduces shock and movement introduced by shaking hands. The f/2.0 aperture (an improvement over the already impressive f/2.2 on the 900) of the new phone means even more professional looking still photos. “But wait,” I hear you saying, “the camera on my iPhone 4S is already stunning!” and that’s true, but Nokia is no longer claiming that they’re competing with other smartphones, instead going after the big boys. Elop’s claim is that the new “floating lens technology” actually “surpasses most digital SLRs” to give you “brighter, clearer images without flash.” Is that true? In the marketing photos they showed off, it certainly looked good, but until we’re able to take the phone out ourselves it will be hard to know.

In terms of settings, Nokia may have simplified the way you deal with the camera (dedicated shutter button, easy controls, new pinch to zoom) but they’ve also added an interesting layer of complexity to the camera: something called “Lens apps” that run on top of the native camera app. The CNN iReport app comes with the new Windows Phone 8 CNN app and can be launched straight from the camera, allowing you to film and submit to iReport straight from the same camera you use for everything else. Other apps, like PhotoSynth, can manipulate images in real time and you can even take panoramas that appear both as standard photos in the camera roll but contain full 360-degree views when launched inside the appropriate lens app. 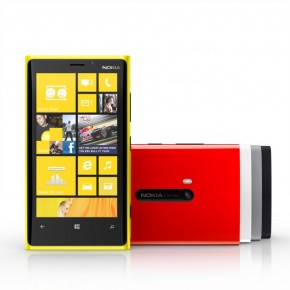 LTE, a 2000mAh battery, Snapdragon S4 processor—these are pretty standard features in all the flagship smartphone world. Where Nokia is differentiating itself this time around is with the technology around the phone.

Wireless charging, similar to Duracell Powermat’s solution, is built-in to the 920 so it can operate with Fatboy charging “pillows” as well as stations Nokia is building into places like the Coffee Bean chain, Virgin Atlantic flights, and Heathrow airport.

The design stays as unique as ever—the beautiful cyan polycarbonate from the first generation is still here, joined by the new flagship yellow, a lipstick red (a mustard and ketchup combo?), slate gray, black and white.

NFC tech is being used in an interesting way. Nokia has teamed up with JBL to offer both a boombox and a set of headphone that work wirelessly with the phone. Rather than a complicated bluetooth setup procedure, you simply tap your phone to the device and it automatically configures the wireless network and begins streaming your music.

Also really cool, Nokia has teamed up with Synaptics to offer something they’re calling “super sensitive touch.” Basically, you can use the phone with a pair of gloves or mittens on, and you don’t have to have those special gloves with the capacitive pads on the fingers to do it anymore! They gave it a demo on stage, and it seemed to work as promised. A small feature, but one that’s sure to make a difference.

Is a Nokia Tablet on the Horizon?

I will say, we’re on a journey to do more and more innovative work in and around Windows Phone. You’ll see many more important steps in the months ahead
-Stephen Elop, Nokia CEO 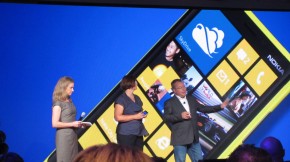 Ballmer talked about the larger Windows ecosystem, so naturally people are curious as to whether or not Nokia is looking to launch something else. A tablet device, perhaps? Stephen Elop, Nokia CEO, didn’t rule that possibility out during the Q&A. “This is an area we’re looking at very closely and hope to be able to talk soon about our plans” was his official statement, which clearly indicates Nokia has something up there sleeve. A superphone? A tablet? Given their track record with industrial design, a Nokia tablet or slate could be an awesome product to behold.

Elop closed the press conference telling us that Nokia offers a “unique and differentiated view” from their perspective as the premiere Windows Phone provider. But with heavy competition, and Apple about to announce an iPhone 5 next week, what do you think? Does Nokia have what it takes to compete in the upcoming year? Will Windows 8 and Windows Phone 8 combine like Voltron to stake out a more substantial share of the mobile marketplace? Leave us a comment, and let us know your thoughts!