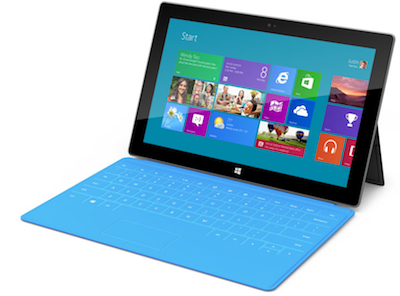 We were all set for the Microsoft Surface announcement next week (they sent us an invite and everything) and then all the sudden this morning, we have more details about the device than have leaked out over the last six months.

First off, the 32 GB Microsoft Surface RT will cost you $499. There’s also a 64GB model that will be $599. Both will come pre-loaded with Windows 8 and Windows. Microsoft is also offering 2 different kind of covers, both of which double as keyboards. The touch cover has flat keys that are pressure sensitive, and costs $120. The type cover has more traditional keys that can actually be pushed, and will set you back $130. If you know you’d like both, you can buy the Surface + cover together for $599 (32GB) or $699 (64GB).

Microsoft will be taking pre-orders at Surface.com starting today at 12pm Pacific/3PM Eastern. Devices will then start shipping October 26th. You’ll also be able to purchase the device at one of Microsoft’s new retail stores, if you happen to live near one…and they’re planning to have 44 stores open by the middle of next year, not including temporary holiday stores.

We’ll take more next week about the specs, user experience, hardware and more next week when we attend the Microsoft Windows 8 & Surface event in NYC. Anything you’re excited for? Let us know in the comments!