#iPadWeek is over! Reunited with my MacBook Pro at last!

I love my iPad, and I found I was actually able to do quite a bit of work on it this week. But I have to say, I sure am glad to have my MacBook Pro back!

Well, temporarily, at least. Unfortunately, I have to take it back to the Apple Store again because, well, I don’t think “the depot” put it back together quite right. The trackpad isn’t quite the same, and the SD card slot is still a little wonky, but hopefully they’ll be able to take care of it quick. I may only have a few weeks left of my AppleCare coverage, but I intend to make the most of it!

After all, I need to make sure this machine is going to last ANOTHER three years!

So how did the rest of my #iPadWeek go? Pretty well, actually, thanks to three apps worth shouting out. 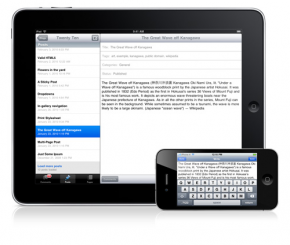 Okay, first up, the WordPress App is far from perfect. I used to think this was a huge problem, but actually it just took some creative problem solving. The app seems to work best when you know how to compose your posts in pure HTML (not the visual editor), which wasn’t a problem for me thanks to my Bluetooth Keyboard Case from Brookstone I mentioned in the last post. With easy access to keys like <, >, “, / and so on, composing in HTML was no harder than on my Mac. Plus, I discovered that some basic keyboard shortcuts I’m used to (Command + C to copy, Command + V to paste, for instance) all worked just like they would on my Mac.

Some advanced features I couldn’t figure out how to use. I didn’t see any way to configure plug-ins, change authors on posts, or anything like that. But I was able to do almost everything else: inserting pictures, embedding video, changing post titles, etc. So while the advanced stuff might be too advanced for the iPad, the WordPress plugin is good enough that if you want to blog from your iPad, you’ll be able to pretty easily. 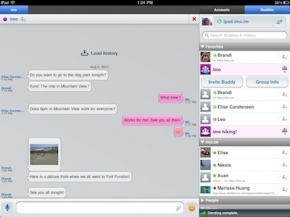 The way Katherine and I run this blog is by talking to each other on Google Mail Chat (aka GChat) all day long, bouncing ideas off each other and coordinating content. While I can get Google Talk on my Samsung Galaxy S III and chat with her there, it’s hard to carry on a long conversation without a keyboard and a larger display.

Enter IMO, a great and FREE messaging client for the iPad. It connected to GChat easily, provided notifications of incoming messages, and even let me click on links! While the in-app browser wasn’t perfect, and it was hard to copy and paste text between IMO and other apps, it’s hard to argue with the price, especially when other GChat apps cost as much as $10!

Again, not perfect, but it worked, and that’s good enough for me.

Okay, so this isn’t work-related, this is a game. One I’m completely obsessed with. It isn’t a stretch to say that Super Hexagon is one the hardest games I’ve ever played in my life. The mechanics are simple: press on the left and right sides of the screen to rotate a little triangle through a maze made up of hexagons that are flying straight towards you. But get this: the first hundred or so times you play, you’ll die in just a few seconds. But over time, I’ve gotten much better and can last 90 seconds on the first stage, and have unlocked the second-to-last stage.

Oh, did I mention that it has a kick-ass soundtrack of chiptune (think original Nintedo-era) music? Yeah, this game is awesome.

Not for the faint of heart, but a great distraction to help you get through the day :) Just don’t blame me if this game causes you to destroy your iPad in frustration. I warned you!