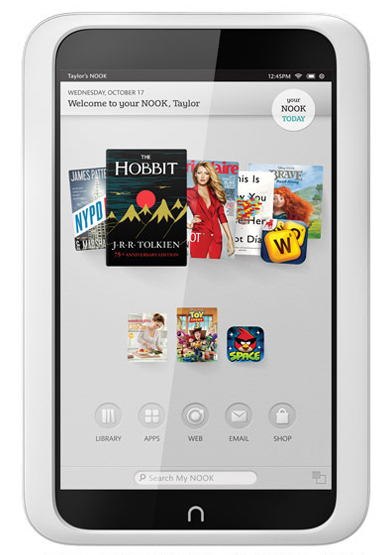 In all the tablet talk in the last couple of weeks, we had kind of forgotten about the Nook from Barnes and Noble. Woops. They’re back with brand-new devices to go head to head with Apple and Amazon. Starting Thursday November 8th, customers will be able to choose from a 7″ Nook HD or the 9″ Nook HD+.

The other major selling feature of the Nook is supposed to be simplicity; Barnes and Noble is marketing the device as a tablet for “families,” meaning that they want to push universal ease of use, rather than promote hardcore tech specs. If you’re curious though, the Nook HD runs a modified version of Android Ice Cream Sandwich 4.0, which is not the latest Android operating system (that would be Jelly Bean). However, B&N is guessing it won’t matter to their audience, instead using the custom OS to provide up to 6 separate profiles for family members.

The 7″ Nook HD with 8GB of storage will run you $200, while the 16GB model costs $230. The Nook HD+ starts at $269.00 for the 16GB version, and 32GB will cost you $299.00. Plus both Nooks also offer expandable microSD storage if you’d like to really increase your tablet’s space. There’s no expandable storage on the Nexus 7, iPad Mini or Kindle Fire, so if you’re into storage, definitely check out the Nook. Ironically though, the Nook is also the only one of those tablets without a camera, meaning users can’t take photos or videos, generally the biggest hogs of built-in storage.

For budget-minded consumers, the original Nooks will see a steep discount this season, with the Nook Color now only $139 and the Nook tablet only $159 for 8 GB or $179 for 16GB. Both are still solid tablet options for the right user, and the price can’t be beat.

What do you think about the Nook?  Would you consider a purchase? Let us know in the comments!