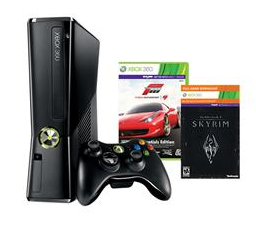 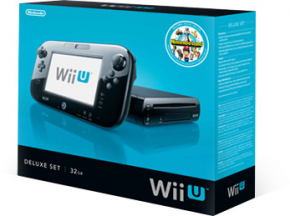 The Nintendo Wii U won’t be going on sale for Black Friday, but is the hottest thing in gaming this Holiday season!

This holiday season is a strange one for gaming. Nintendo JUST released the Wii U so for gamers, that’s going to be the HOTTEST product on the market. But because it came out over the weekend, you’re not going to see any big sales this holiday season. At $299 for the standard edition, and $349 for the deluxe edition which includes a game, it’s also a little pricier than other consoles this year.

But if your kids really want a Wii U, there really isn’t too much of alternative! Well, you could go with the Nintendo 3DS (there’s a deal on that below!) but you’ll want to find out what your child REALLY wants and get them a gift that matches their expectations!

Because the Xbox 360 and the Playstation 3 have been on the market for so long, there are some insane deals on those consoles this year. If your kids don’t already have at least one, and they want to play the hottest games, this might be the last year you’re going to see deals like this. By next Christmas, other new consoles may be hitting the market. We don’t know anything definitive yet, but Microsoft and Sony are working on their next-gen consoles as we speak. So keep that in mind too—you may not want to drop $200 or more on a console this year only to have your kids begging for a new one next year. But if you think your kids can wait and be happy with the current gen tech, check out these deals:

The entry level model of the Xbox 360 is going to be $30 off at Radio Shack this Black Friday. While you get a LOT more for your money at Best Buy this Friday, if you’re on a limited budget this is the best deal we’ve seen. Skip the $99 Xbox with 2-year contract and get this one instead. You’ll save money in the long run, and if your kid doesn’t want or need to play games online, you won’t have to get an Xbox Live subscription.

This deal is insane. Two AAA games, Skyrim and Forza 4, plus the 250 GB Xbox (regular retail price $299) PLUS a headset, all for the standard price of the 4GB Xbox 360. If you don’t know those two games, Skyrim is probably the biggest and most anticipated RPG of the past few years. Set in a medieval fantasy genre, it provides literally hundreds of hours of dragon slaying for your kid to enjoy. Forza 4 is one of the top racing simulation franchises, and offers a deep and engaging gameplay. 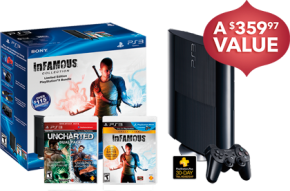 A somewhat comparable deal to the Xbox 360 one, the Playstation 3 bundle doesn’t include a headset but one of its games is actually 2-in-1: you get both Uncharted 1 and 2 in the same bundle, on top of inFAMOUS. All three games are Playstation exclusives, but the two Uncharted games are a little dated as the third installment came out LAST year. But these are some of the top-reviewed PS3-exclusive titles, and if someone doesn’t already own the Playstation 3, this is probably the perfect place to start.

Plus, unlike Xbox, you don’t have to subscribe to any service to play games online or watch movies or TV with Netflix and Hulu apps. While Sony does offer a premium service, called Playstation Plus it’s completely optional. 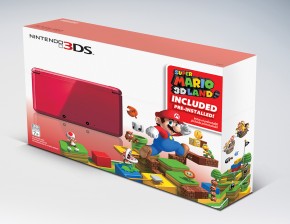 While Nintendo’s OTHER system, the 3DS isn’t going to see a price drop this Black Friday, you will be able to score a Limited-Edition Flame Red 3DS and get Super Mario 3D Land for free, pre-installed.

This is a great deal if you know your giftee is a Nintendo fan (and let’s be honest, if you’re considering the 3DS for someone, they’re probably a huge Mario, Zelda, or Pokemon junkie), because the new Super Mario 3D Land just came out and is still selling for it’s regular price of $39.99.

Many brand new AAA titles, none of which have seen much of a discount below their $59.99 starting prices yet this holiday season, are getting deep discounts at Best Buy on Friday. Some of the best deals I’ve seen are Assassins Creed 3 for Xbox, Madden NFL 2013 for Xbox, and Borderlands 2 for Playstation 3.

That’s a wrap for gaming. Have questions? Concerns? Drop us a line in the comments below and we’ll be sure to hit you back as quick as we can!