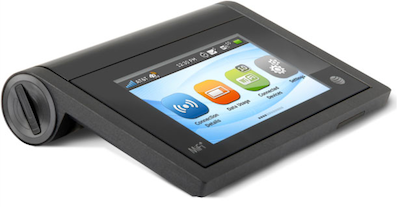 The MiFi LIberate is the first-ever touchscreen hotspot

It’s kind of amazing, but sometimes 4G LTE download and upload speeds are faster than your home Internet access. Other times when you need to the web, there’s just no WiFi to be had, and a small mobile screen isn’t going to cut it. That’s what a hotspot is for: think of it like a portable router that can power multiple devices, but uses your cell signal instead of WiFi.

The MiFi Liberate is a new touchscreen hotspot from AT&T. It’s the first touchscreen to come on the market, and the screen gives a quick at-a-glance  picture of important stats, like network status and how much battery life you have left. The interface should feel pretty natural for anyone used to navigating a smartphone: the homescreen has icons that are easily tapped for the important details, like how much data you’ve used: .

Battery life is always huge selling point for any kind of mobile device, and this a point where the MiFi shines, promising 11 hours of battery life (enough to outlast a couple of laptops). The battery life is almost twice that of many competitors, thought the device is slightly larger than average, too. It weighs in at 4.3 ounces, with dimensions of 4.1 x 2.9 x 0.9 inches, which still seem perfectly manageable and portable.

Anyone who travels regularly, especially frequent fliers, should consider a Hotspot, as should anyone who just travels to a local Starbucks to get some work done! For many, the promise constant internet access is reassuring, and for others it’s a lifesaver. Either way, it’s worth evaluating if it’s a must-have for your business.

The MiFi Liberate is $50 through AT&T on one of their shared data plans. Go here for more information or to order.