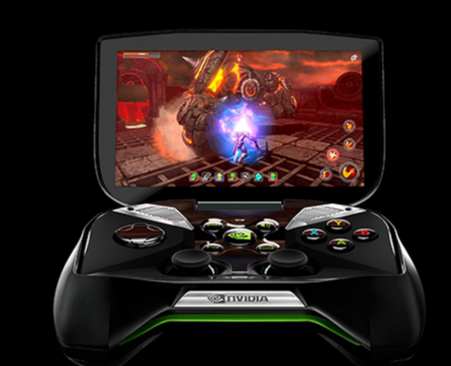 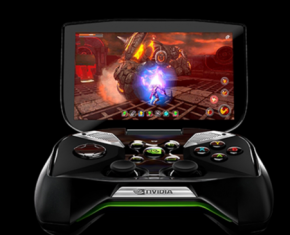 One unsual announcement that’s already come out of CES is from the graphics card company NVIDIA. Yesterday they announced “Project Shield” a handheld gaming console based on their new Tegra 4 mobile graphics chipset. While their previous graphics card for tablet, called “Tegra 3”, has been powering higher-end Android tablets this past year, Tegra 4 promises to deliver next-generation level graphics

Both a handheld device and a controller that can stream your games wirelessly to a TV, the Project Shield gaming device from NVIDIA looks to fill a similar gap in the market as the Wii U—half-tablet, half console. Unlike the Wii U, however, Project Shield will be a portable device competing more directly with Nintendo’s 3DS and Playstation’s Vita console. It will be powered by the latest Android OS, so not only will it play games, it will run all of your favorite apps as well, just like today’s crop of tablet computers, albeit one with a console-grade controller built-in.

Can NVIDIA succeed? That’s a tough question. With Apple’s devices already eating into Nintendo’s marketshare in mobile gaming, and Sony already an established player in portable electronics, is there room for a 3rd contender that lacks the marketshare and exclusive titles that Nintendo and Sony have to offer? After all, being able to deliver world class graphics is one thing, but if gamers can’t get titles equivalent to Super Mario Bros., Zelda, Street Fighter and Assassin’s Creed, will they change systems?

Then there’s the question of price. Certainly, if Project Shield is to compete with consoles as well as portable gaming devices, it will need to compete on hardware with the next generation Xbox, Playstation, and the Wii U. Pack all that power into an HD touchscreen device and it’s hard to imagine NVIDIA bringing this to market for less than $400. When compared to the cost of a Nintendo 3DS at $169 or a Playstation Vita at $249, it’s hard to imagine that consumers will be enticed at that price point.

But in order to survive into the next millenium, this may be a crucial move for NVIDIA. In gaming, they have been struggling. While their chips power Sony’s Playstation 3 console, the better-selling Xbox 360 and Wii consoles use chips from rival AMD (formerly known as ATI). Nevermind the fact that the just-released Wii U from Nintendo uses AMD chips as well.

In mobile, Tegra 3 found mass-market success in the Nexus 7 tablet from Asus and Google. But it’s worth keeping in mind that the Android gaming market has a long way to go to catch up with Apple’s iPad and iPhone systems where the latest games are often launched first, sometimes exclusively. While the Nexus 7 is a great device for reading books, browsing the web, engaging on social media, and watching movies, it isn’t exactly known in the marketplace as a “gaming tablet.”

However, if NVIDIA can find partnerships like the one with Google to get Tegra 4 onto more devices and raise awareness around Android gaming, that’ll be the first step towards success with the platform. The trickier problems is how to make gaming on Android the next big thing.