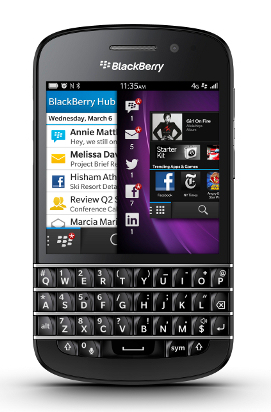 Are New Phones, a New OS and a New Name Enough to Save BlackBerry?

Yesterday’s huge announcements from Research in Motion begs two big questions: will the new offerings be any good, and will they be good enough? The company announced that they will officially be changing their name to BlackBerry, showing that they’re willing to put everything they’ve got into the BlackBerry product line, for better or worse. So what did the BlackBerry company show off?

First up, there are two new phones, the Z10 and the Q10. The z10 should look familiar to you, insofar as it could be a phone from any manufacturer, with a 4.2″ touchscreen and matte black finish. Which isn’t to say that the design isn’t nice — it is, it’s just not that revolutionary. The Q10, on the other hand, preserves what so many of us loved about BlackBerry in the first place: it’s a got a physical keyboard (in addition to a touchscreen). That’s huge. Most of the major manufacturers have followed Apple’s lead and abandoned the keyboard altogether, but there may still be a market for that keyboard yet. Unfortunately, we won’t find out for another few months, since the Q10 isn’t scheduled for release till April. The Z10 should be available from all the major carriers (except Sprint) in March.

But what about the OS? BlackBerry (fka RIM) is neither a hardware nor a software manufacturer, and it’s important they get both parts of the new BlackBerry experience right. So far, the most revolutionary idea of the new BlackBerry 10 OS is the notification hub, which aggregates email along with SMS, BB messages, and notifications from apps like Twitter into a centralized “inbox.” The idea is that it is more convenient to respond to all of your incoming communications from one place, and that functionally it doesn’t make a lot of sense to treat emails differently from Twitter notifications.

Why is all this so important? RIM’s market share has been dropping for some time, and most of their offerings seem to be on life support. Their last major offering, a tablet called the Playbook, didn’t get a lot of positive press. It takes a lot of time and money to release a new product onto the market, and these new offerings have already been delayed many times. This could be a last stand for BlackBerry, but we have some time to see whether they will be able to generate enough excitement to make a real comeback.