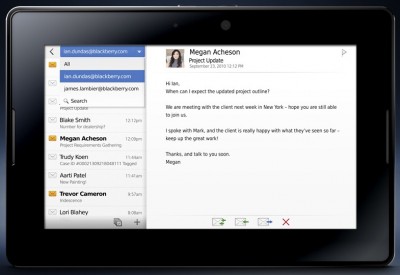 Close call! It looks like “essential” native apps for email, calendar, contacts, tasks, and other mobile apps will be coming to the newly launched BlackBerry PlayBook Tablet.

Currently, PlayBook users who want to view/manage this data via their tablet are tied to their BlackBerry smartphones. In order to take advantage of those services, you have to use the new BlackBerry Bridge technology that pairs the PlayBook via Bluetooth to a BB smartphone for greater functionality.

Today during the BlackBerry World Conference, some of the former mentioned services were demoed without being paired to a BB smartphone. What does this mean? Essentially, people using the PlayBook don’t necessarily need a BB smartphone, or depend solely on web apps to access these services. I have no beef whatsoever with web apps, but native apps use the device they are designed for a little better than a web app that’s created to provide functionality for a number of devices, IMHO. All you need is a data connection (PlayBook 3G/4G model or WiFi) and you will be on the same playing field as other tablet platforms with native apps.

Furthermore, if wireless carriers all of the sudden decided they don’t particularly like the idea of PlayBook users piggy-backing off of a BB smartphone’s data connection and pulled the plug; having native apps means that you still get your email, calendar appointments, contact lists, etc., while RIM and the wireless carriers hash it out.

If you are a BlackBerry Tablet owner, or looking for an Apple iPad alternative, I think the BlackBerry PlayBook, once it’s retrofitted with “essential” native apps and some other OS tweaks will be a serious contender come this summer.

But we want to hear from you. Is the lack of native email, calendar, contacts, tasks, memos, and similar apps/services stopping you from pulling the trigger on the new BlackBerry PlayBook?