Is your small business conducting e-commerce directly through Facebook?  According to a recent study by Ability Commerce, only 10% of the Web’s largest retailers sell products directly through Facebook.  Are retailers simply not hip to the sell-through potential of the world’s most popular social media site?  Or, as I pointed out in my early review of Google+, is this just indicative of Facebook’s long-standing difficulties in integrating e-commerce into its social networking architecture? First, before we press any further, a caveat; Ability Commerce specializes in providing integrated e-commerce software solutions, like, say, an in-Facebook retail experience.  Point is, they’re not some disinterested third-party research group; rather, they conducted their study to demonstrate how many businesses are missing out on sales that could potentially be realized through the use of Ability’s software products.

This doesn’t invalidate Ability’s findings, but it does call into question their presuppositions; namely, are online businesses really losing sales by not having a Facebook-integrated retail system? 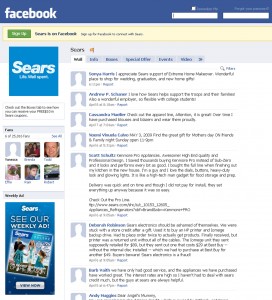 Informal surveys of e-commerce merchants has found that Facebook is a significant driver of traffic to retail sites, and that final conversion rates among Facebook-referred customers are double the norm.  While promising, those anecdotal stats refer to referrals generated within Facebook, which then leads the customer to the retailer’s main website.  There isn’t any hard research out there that suggests Facebook users are clamoring for in-Facebook shopping experiences, and probably for good reason; people go to Facebook to post photos, check their friends’ status updates, play social games, etc.  Many retailers, both large and small, now have Facebook profiles, where they can post product updates and poll customers, but, as Ability’s study found, very few are offering in-Facebook sell-through experiences.

Part of this reluctance is likely due to long shadow of the controversial Facebook Beacon project, which tracked users’ purchases from third-party sites and automatically posted them as “updates” on users’ Facebook walls.  Beacon was met with a well-deserved storm of controversy, and Facebook quickly shut down the project.  Given how Facebook’s privacy and security settings are notoriously convoluted and ever-changing, it’s likely that many users would feel uncomfortable with an in-Facebook retail experience, since they wouldn’t be certain whether such purchases would be published for everyone else to see, nor how Facebook might use such data.

Both Facebook and Twitter have become indispensible resources for online businesses, allowing them to maintain a closer, more immediate relationship with customers than was ever possible before.  Cultivating a faithful clientele takes an enormous amount of effort, and the current risk/reward ratio with in-Facebook retailing is too uncertain—Will customers think their purchasing decisions are being tracked and sold by Facebook?  Are they concerned that their activities will be made public?—to make it a strategy I’d readily recommend at the present moment.  Perhaps, over time, in-Facebook retailing will become the norm, and customers will make purchases without giving it a second thought; but for the time being, this is one social media trend for which businesses may want to take a “wait and see” approach.