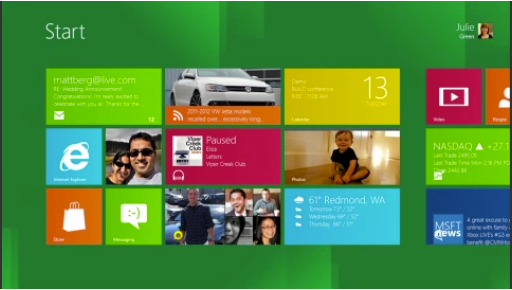 The Tablet World is Shaking Up: Microsoft Unveils Windows 8 OS with “Metro” UI for You To Touch 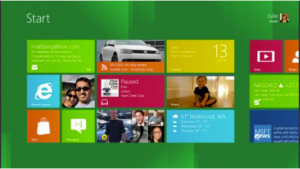 Big changes are coming to the Windows OS environment, as Microsoft unveiled the new Windows 8 OS at its BUILD Conference last week. While there are tons of the changes one typically expects from an OS revision—new features, the removal of some older features, etc.—the big news is that Redmond will be taking the “Metro” user-interface design, first introduced in the Windows Phone 7 mobile OS, and applying it as an across-the-board UI for its desktop, tablet, phone, and Xbox operating systems.  Despite the underwhelming sales of Windows Phone 7 devices (Ballmer himself admits that they haven’t sold as well as he’d like), the Metro UI is really slick, and it’s exciting to see that Microsoft is fully committed to re-imagining the computing experience it provides to consumers.

Sure, in many ways, this is simply Microsoft’s response to Apple’s meteoric rise of the past few years, as OSX and iOS offer fairly consistent cross-platform visual design and UI elements.  What’s exciting about the Windows 8 platform, though, is that it’s not Apple-like at all; Microsoft’s clearly put an enormous amount of resources into completely re-imagining the computing experience, and are attempting to essentially out-Apple the competition by releasing a system that’s genuinely innovative and unprecedented.  In many respects, this is probably the most significant new version of Windows since the introduction of Windows 3.1 almost twenty years ago.

The similarities between Windows 8 and Windows 3.1 aren’t just ones of cultural or corporate importance, as the radical newness of Windows 8 faces the same problems Windows 3.1 confronted vis-à-vis MS-DOS; namely, legacy support.  Unlike Apple, who’s never had a strong penetration in enterprise markets, and has therefore not been burdened with providing support for older hardware configurations in its new OS releases, Microsoft has to ensure that Windows 8 will be compatible with a wide range of hardware setups and obscure software profiles.  Windows 3.1 addressed this issue by installing on top of a MS-DOS environment, and it appears that Windows 8 will address the hardware side of things by having the same hardware requirements as Windows 7.  The software side is where things get trickier, as there will be two UI modes; the new “Metro” UI, and a more traditional UI, in the vein of Windows 7.  This bifurcated UI will rear its head across the platform; for instance, Windows 8 will ship with two different versions of Internet Explorer, as the “Metro” IE will not support plug-ins (since MS is hoping that HTML5 will soon allow for a plug-in-free Web), which means that users will have to switch to a different version of Internet Explorer if they, perchance, want to visit Web pages with Flash content.

These annoyances are pretty much unavoidable, though, the growing pains of radically reconfiguring the world’s most popular operative system, and (attempting to) seamlessly extend it across a wide variety of product platforms.  The smoothest transition should occur on the Xbox, where Microsoft enjoys an Apple-like control over both hardware and software.  The Xbox Live Fall 2011 Dashboard update will not only bring the Metro UI to the Xbox , it will also provide full Kinect-powered voice and motion controls to the entire platform; using a Bing-powered search engine, users will only have to say “Xbox, Bing, Iron Man,” to view all of the Iron Man-related content offerings available through the Xbox.  With rumors and promises of live-tv integration on the Xbox due by Christmas, the Xbox could become the living room entertainment portal that Redmond’s been striving for since the days of WebTV, and the deeply integrated Metro UI experience should greatly enhance the system’s appeal to non-gamers, who would otherwise be reluctant to learn a new platform or interface.  Microsoft is also promising Xbox Live functionality on Windows 8 desktops, though it’s still too early to tell how exactly this integration will work.

Despite its cross-platform implementation, the touch-centric Metro UI is really meant for tablets and cellphones, and it is here, ironically, where Microsoft’s gambit seems most uncertain.  Though early reviews of the Windows 8 tablet experience are quite positive, tablet manufacturers have already derided the hardware requirements as “troublesome,” quite possibly because—despite Windows 8’s modest hardware demands for basic functionality—the component costs of building a high-performing Windows 8 tablet will make it considerably more expensive than an iPad or Android tablet.  Unlike iOS or Android, Microsoft will attempt to shoehorn a desktop operating system into a tablet form factor; while this strategy might work in a few years’ time, given the current costs of tablet components, it seems as though this strategy will only yield miserably under-performing—yet affordable—low-end tablets, and/or high-end, well-performing Windows 8 tablets that few can afford.

Only time will tell whether Windows 8 will find success in the tablet market, though I predict that Microsoft will have a few bumpy years in that sector before declining components costs and refinements to the Windows 8 tablet implementation make it a true competitor to Apple and Google’s offerings.  The future of Windows Phone 8 is similarly uncertain, as it’s unclear how Microsoft expects to counter consumers’ disinterest in their mobile OS platform (it seems doubtful that Nokia alone can significantly reverse Microsoft’s mobile fortunes).  On the desktop, laptop, and living room fronts, however, Microsoft appears to be firing on all cylinders, and if hardware manufacturers step up to the plate with Apple-worthy PC designs, Microsoft might actually succeed in recapturing significant consumer mindshare from Apple.  In all, for as revolutionary as Windows 8 is, it’s also transitional; as Microsoft seeks to move forward, it’s also seeking deeper cross-platform integration, though it’s inevitable that their success will not be equal across every platform they pursue.