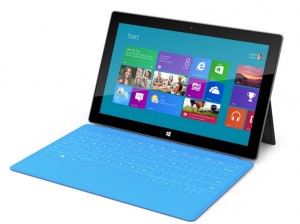 It’s finally confirmed: Microsoft Surface, Microsoft’s groundbreaking entry to the personal computer/tablet market, will be available to users starting October 26, 2012, along with Windows 8, the latest incarnation of the Windows OS .

A long time in the making, Microsoft first debuted the Surface to the world just last month, but without a firm release date or a price tag attached. And while we still don’t know much a Surface will set you back, we do know a little of what you’ll get.

The most prominent (and innovative) feature of Microsoft Surface is its built-in keyboard that doubles as a cover to protect the machine’s screen, a clever innovation. Even with the cover, Surface is only 9.3mm thick (for comparison, that’s .2mm thinner than the latest iPad) but still manages to incorporate a full-size USB port and a Micro SD card. And while journalists haven’t been given Surfaces to review yet, we do know that they will be running Windows 8, which gives us a sense of the device’s interaction experience.

Why is Surface so noteworthy?

Well, if you’ve bought a PC lately, it was likely from Sony, HP, Dell, Acer or another manufacturer. It certainly wasn’t from Microsoft, and that’s because until now Microsoft has limited its forays into the hardware business to peripherals like keyboards and mice. The Surface tablet changes that, putting Microsoft into direct competition with its pals: the PC manufacturers.

Given its incredible portability, keyboard, and the fact that Windows is still the preferred OS for many business applications, Surface has the potential to be the first device to truly bridge the tablet/laptop divide. But only if the device — and Windows 8 — live up to their potential.