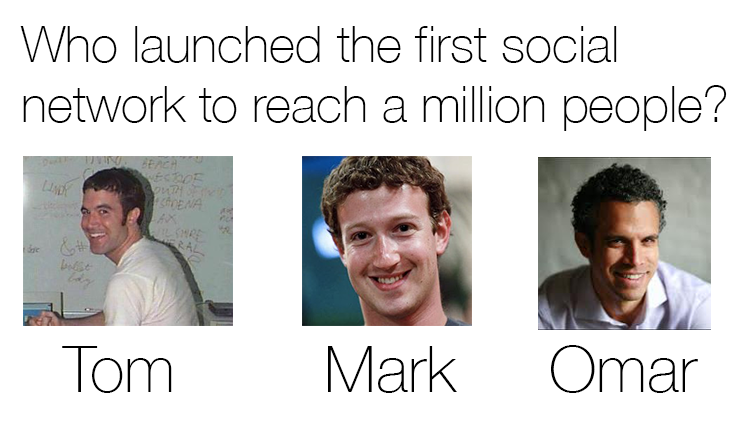 Yes, we still have to talk about Blacks in Tech

As the official Hashtagologist™ for the #NPRBlacksinTech hashtag being curated by Tell Me More, I’ve been asked to give you a recap of what’s been happening so far on social media. But I also think it’s important to at some of the discussions and comments that have come from readers and commenters like yourself in addition to official participants. #NPRBlacksinTech is an important conversation, not just for twenty days this month, but also for the coming weeks and years — though hopefully not for decades! To start, here’s a  quick quiz. 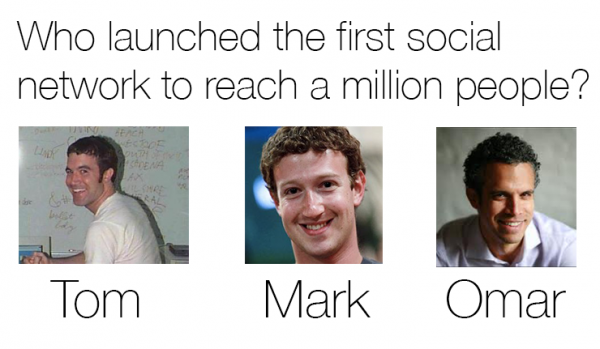 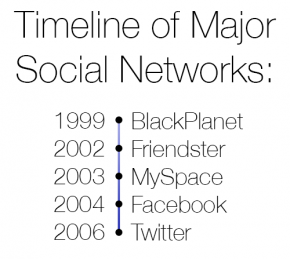 Omar Wasow started his social media site  “New York Online” from his living room in Brooklyn in 1993. And in 1999, four years before MySpace, three years before Friendster, and five years before Mark Zuckerberg launched “Thefacebook” from his Harvard dorm room, Omar started BlackPlanet. It was one of the very first sites on the Internet in a new wave of what came to be called “social networks.”

“The guys who started Myspace were quoted in Business Week magazine saying that they looked at BlackPlanet as a model for Myspace and thought there was an opportunity to do a general market version of what BlackPlanet was.”
-Omar Wasow

Above: The top-rated comment on the announcement for #NPRBlacksinTech

In the years since BlackPlanet launched, Tom sold MySpace to NewsCorp for hundreds of millions. Zuckerberg’s Facebook has become a household name, is one of the most heavily visited destinations on the Internet, and recently raised billions during the company’s IPO. But nobody seems to even remember Mr. Wasow’s name. How can that be? 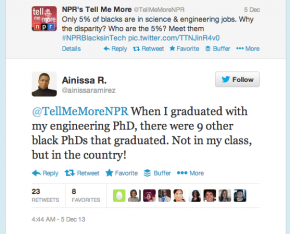 When people ask me why we need to take this December to tweet with the hashtag #NPRBlacksinTech it forces me to think hard about Omar Wasow’s inspiring story: he’s a great example of why we should use our energy to discuss and highlight the amazing contributions that blacks have made, and continue to make, to our connected world. He’s an incredible success story, a highly intelligent individual who was able to operate years ahead of his time, and yes, he did eventually sell BlackPlanet along with several other sites for $38 million. Today, Omar’s an Assistant Professor at Princeton, got his BA at Stanford and earned three post-graduate degrees from Harvard (a PhD in African American studies, an MA in Government and an MA in Statistics). Furthermore, I am honored to know Omar personally and to have had numerous discussions with him over the years.

But still I’m left with the obvious fact that“Omar Wasow” is still not a household name in the way “Mark Zuckerberg” is, and most people would not recognize Omar if they saw him on the street. Perhaps most damaging is the fact many black kids don’t realize that Omar, a positive role model, had accomplished so much before Zuckerberg made his mark. I hear and see headlines all the time relating to STEM (science, technology, engineering, and math) asking “Who’s going to be the next Steve Jobs or the next Mark Zuckerberg?” and it begs the question, how come no one seems to ask “Who’s going to be the next Omar Wasow?”

You can definitely argue that Omar was in the wrong place (New York City instead of Silicon Valley) at the wrong time (2001 instead of 2004). You could also argue that Wasow missed the boat because his social networks “Asian Avenue” and “Mi Gente” were limited to minority audiences. But Mark Zuckerberg’s Facebook may have started as an exclusive network for Ivy League college students, and it eventually grew to include everyone.

But take one look at pictures of any of the billionaire founders of Twitter, Facebook, MySpace, or any other major social network, and then compare those faces to Wasow’s. You’ll see a more powerful fact emerge: Wasow stands alone as a black face in an almost exclusively white crowd! Why? When future generations read and learn about the history of innovation and social networking, will book authors and publishers happen to overlook or not recognize Omar Wasow and perpetuate this problem?

This isn’t just about Omar, so let’s continue our quiz! For $1000 in the “Blacks in Tech” category, give this Jeopardy-style question a shot: 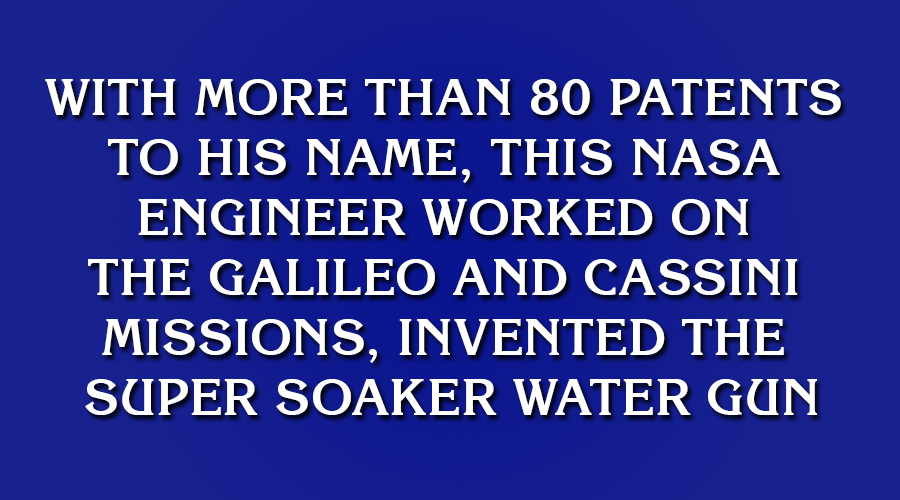 Did you get it? The answer I’m looking for is, “Who is Dr. Lonnie Johnson!”

And what a great question: “Who is Dr. Lonnie Johnson?”

Born in 1949 in Mobile, Alabama and growing up during an era of legal segregation and intense racism, Dr. Johnson was told by his teachers at his all-black high school that he’d never become anything more than a technician. Instead, Dr. Johnson went on to receive his M.S. in Nuclear Engineering from Tuskegee University. He put that degree to great use, joining the U.S. Air Force where he helped to develop the stealth bomber. At NASA, Dr. Johnson had a long career as a systems engineer. In the late 80’s, Johnson worked on the team that launched the Gailieo spacecraft to study Jupiter and its moons. More recently, he served as an engineer on the Cassini mission to study Saturn.

But Dr. Johnson is perhaps best known for U.S. Patent No. 4,591,071, which describes a “squirt gun” that he invented. Working late at night in his basement, Johnson attached a homemade nozzle to a tube connected to his bathroom sink and realized he could blast water clear across the room. Licensing his technology to Larami Corp., Johnson’s squirt gun was rechristened the “Super Soaker” and became the best selling toy in America, with total sales in excess of one billion dollars.

From social media to squirt guns, blacks have always contributed and innovated, making a huge impact to society. But, it seems all too often these stories aren’t being told, shared widely or recorded.

Some reading this article may think a major part of the problem could be that there are not enough black kids with the desire to pursue careers in STEM fields. But please don’t subscribe to that idea unless you have personally experienced it! I have lots of real-world experience with kids that tell me that simply isn’t true. My Dream, Create, GO!® tour, has visited schools, camps, churches and youth conferences over the past 3 years and I have presented to over 39,200 kids. The tour inspires kids and helps them realize how their passions are connected to STEM. Never once, did I find a black, white, asian or latino child who wasn’t excited by STEM – it’s got nothing to do with race. It has everything to do with exposure, mentorship and education!

And it’s really about education. I could talk all day about the need to promote STEM fields to make sure the next generation of black youth have the tools they need to succeed. With all the different types of technology we want in a better world, education will be the key to whether black youth will be the ones to create the next generation of automobiles, toys, websites, apps, green energy solutions and more. This is why I get excited about programs like Code.org, BlackGirlsCode, MVMT50.com, DiversiTech and others.

So, for my final quiz question we turn to Wheel of Fortune. Do you know the name of this highly influential CEO in the field of education technology? I’ll even give you a vowel, the letter “I”, to get you started: 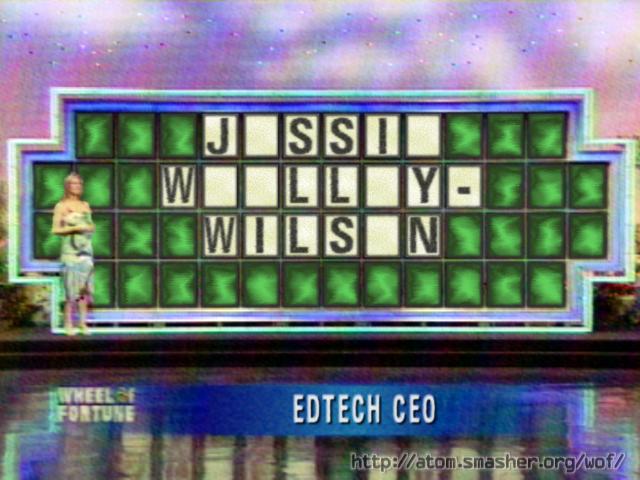 As the president and CEO of DreamBox Learning, Jessie Woolley-Wilson is a major game-changer in the EdTech field. DreamBox’s “Intelligent Adaptive Learning” systems turn computers into truly next-generation learning devices by adapting teaching materials to each individual student’s learning needs. We all know that students crave individualized attention and a customized curriculum to learn at the top levels, but Woolley-Wilson is actually creating that technology and making sure it finds its ways into classrooms across the country.

#NPRBlacksinTech is about more than just highlighting these individuals and the participants who are sharing their stories on Twitter throughout December. It’s about making sure a deep and engaging dialogue around blacks in technology continues to happen to ensure that the next generation of black technologists and thought leaders don’t fall by the wayside, either because they don’t have the right role models or the educational tools for success. One of the trickiest problems in our changing economy is to provide access for all, and I think the work of Jessie Woolley-Wilson and her peers at DreamBox are a part of the frontrunners in that race.

So when people ask why do we need a focus on blacks in tech, hopefully this post has given you some insight as to part of the answer. If we can all agree that STEM is our economic future, then we can also agree that we need to perpetuate a virtuous cycle of feedback where the achievements of minorities and women are noted, celebrated, financially supported and then emulated. That is going to help more kids see STEM as a reality for themselves and hopefully the betterment of our society.

I tell kids all the time “in order to personally grow, you need to be comfortable, being uncomfortable!” I’m hoping through this post that adults may embrace the thought as well.