Apple CarPlay coming in 2014, promises safer way to use iPhone in your car

I’ve been saying for years that we all need to do our part to end texting and driving, because every time you pick up that smartphone while driving you put other drivers, pedestrians, and yourself at risk.

Apple announced an interesting new tech today, called “CarPlay,” which aims to integrate your iPhone’s display straight into the dashboard of your car, and allow you to do more, hands free. It includes a bunch of different features, like launching Siri from your steering wheel and integrating with knobs, dials and buttons in your car. Siri even learns a few new tricks which should further help you to put down the phone and keep your eyes on the road.

The biggest danger zone while driving is still the text message. Having to read a whole message and then type out a response can take so long you put yourself or others in danger. That’s why the feature I’m most excited about is that Siri learns how to read your incoming messages out loud while in CarPlay mode, and then you can dictate responses, so you’ll never have to even glance at your phone to handle a text message while driving again. 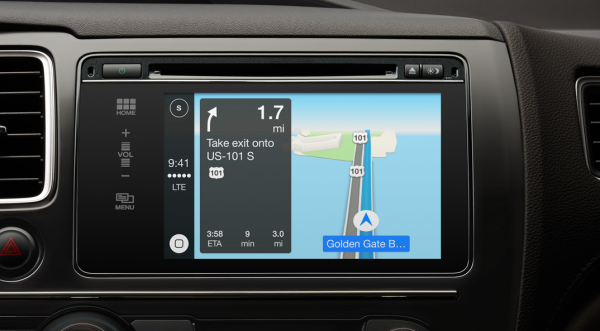 More than just placing maps on the touchscreen in your car, CarPlay beefs up your mapping experience by taking cues from Google Now and trying to predict where you’re going based on addresses from your email, text messages, contacts and calendars.

Siri can do more with your phone calls than ever when in CarPlay mode. Instead of simply making calls, she can return missed calls and read you your voicemail, all handsfree.

What would an iPhone car integration be without music apps? More than just a new way to interface with your library on your stereo, CarPlay brings deeper integration with your favorite music apps, including Beats Radio, Podcasts, iHeartRadio, Spotify, Stitcher and more!

So far, six car manufacturers have signed on to produce new automobiles with CarPlay in 2014: Ferrari, Honda, Hyundai, Jaguar, Mercedes-Benz, and Volvo.

While that’s exciting to start, another 12 manufacturers have committed to including the tech in futures cars, although not necessarily models coming out this year. See the image below for that more complete list:

What do you think? Are you excited about having a car with built-in iPhone integration? Will this tech make it easier to use your phone in a car while saving lives? Leave a comment in the section below and let me know what you think!