Entitle: a new app trying to be the “Netflix for eBooks”

This is a guest post contributed by Shy Mukerjee, the Managing and Online Editor of Mario Armstrong Media

As an avid reader, I want a Netflix for eBooks more than any other app. I want a service that’s low-cost, has a huge and deep library, and allows me to binge on books the same way Netflix helps you lose an entire weekend watching TV episodes back-to-back-to-back.

In that search I’ve tried Oyster’s $9.99/month plan which let’s you read an unlimited number of books from their collection of 200,000 eBooks. I’ve also tried Byliner which doesn’t have books, exactly, but instead a seemingly-endless supply long(er) magazine articles.

A new entrant, called Entitle, is trying a new approach: for $9.99 a month, you get two eBooks. While at first glance, this seems like worse deal than Oyster, there’s a very cool catch: you get to keep the books.

Entitle works as promised: I downloaded the app on my iPad, where I was able to browse their collection. Two books jumped out at me: The Thank You Economy, by Gary Vaynerchuk and The Perfect Thing: How the iPod Shuffles Commerce, Culture and Coolness by Steven Levy. These books are both a bit dated (from 2011 and 2006 respectively), but both were also good deals: I would’ve had to spend over $23 to buy them on my Kindle, meaning I saved $13, which is awesome.

You can get ripped off

While I saved money on the books I picked, it required some comparison shopping to make it work out. After all, you don’t buy books directly with Entitle, you pay them $9.99 a month and get two download credits. This is often a great deal, but if you’ve bought eBooks before you probably know that while some titles cost $10 and up, many eBooks are available for a dollar or two.

This means that for Entitle to save you money, you need to have your iPad in one hand and have Amazon open on your computer so you can price check the Kindle editions. Amazon has many books cheaper than the $5 you’d be paying on Entitle, so to skip this step means you could be overpaying with Entitle.

In my brief time with Entitle so far, I discovered many such discrepancies. For instance, you can use your Entitle credit to get Gary Paulsen’s Hatchet, one of my favorite books when I was young. Or you could buy that eBook on Amazon for $3.74, saving yourself some money.

Some examples were even more egregious. Mark Cuban’s How to Win has always been priced at only $2.99 on Amazon. If you were to spend your Entitle credit, you’ve overpaid by $2. That’s good for Entitle’s profits, but terrible for your wallet.

I have pretty high standards: books purchased from the iBooks store or for my dedicated Kindle eReader are not always perfect, but they usually look great and are easy to read. My experience with Entitle was mixed. While Vaynerchuk’s book looked amazing, Levy’s book didn’t look so hot. It had small, tightly spaced, Times New Roman text and HUGE margins. Compare the two here: 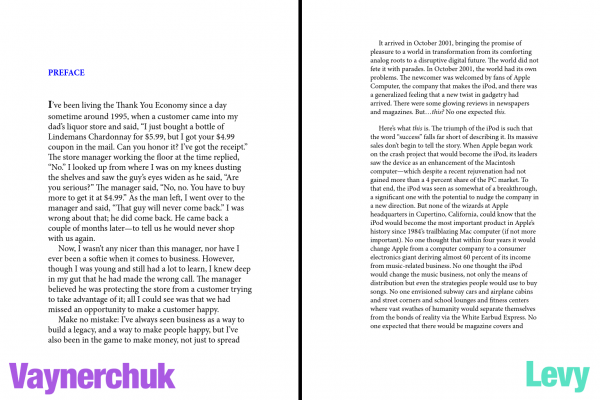 Having just finished the recently-updated Insanely Great by Steven Levy on my Kindle last week, I can definitely say that Amazon does a better job formatting his books than Entitle did. However, Amazon books are often prone to typos, and Insanely Great was full of them while the Entitle edition seemed free of typos. So it’s really a toss-up as to which was better.

Unlike the iBook or Kindle apps on my iPad 2, the Entitle app often felt sluggish while browsing the store, with the screen sometimes skipping around for what seemed like no reason. Thankfully, the experience actually reading books with the Entitle app was perfect. Pages turned smoothly, and text seemed to render well for both of the books I tried.

Are the books really yours?

While the books stay on your device, even if your subscription lapses (I tested this) and you can download them from the Entitle web site at any time as well, they’re not exactly yours to do whatever you want with. With Adobe’s Digital Rights Management (DRM) software applied to the .acsm files you get from Entitle’s web site, you can only open them using Adobe’s Digital Editions software, decrypt them with your Entitle login information, and send them to certain devices.

This means two things. One, if Entitle goes out of business, your eBooks may go poof as well, rending any savings moot.

Two, you can only transfer books to devices supported by Adobe’s DRM, namely Nook, Kobo, and Sony Reader devices. Notably, you can’t legally move your books from Entitle to an Amazon Kindle.

While I like saving money and being able to keep my books, the sad fact is that Entitle isn’t the “Netflix for books”, it’s something else entirely. For some readers it may be a bargain, but only if you’re willing to spend the time to comparison shop.