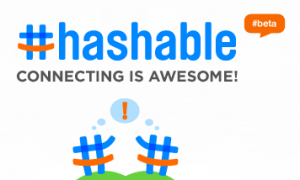 Hashable App for iPhone and Android: Throw Away your Business Cards?

If you’re a heavy Twitter user and own an iPhone or Android device, chances are you meet enough people in the same boat that you could simply use the Hashable app to connect with people, trade contact information, and grow your network without having to hand out business cards like a robot.

After you’ve done your chit-chat/elevator pitch at an event, immediately following up via Twitter (“Hey, it was to good to meet up with @[Twitter handle] tonight at blankety-blank event”) a is the popular way to go. Sometimes finding a Twitter name, following them and/or sending out a tweet in the middle of a conversation can produce 50/50 results via your Twitter client of choice. Hashable looks to smooth out that process by letting you set up your profile ahead of time and trading information in just a couple of clicks. Hashable also includes several pre-defined hashtags (hence the name) that you can choose from to quickly send out a “guess who I just met” Tweet without all the fuss.

Once you’ve made the connection and added their contact information to your iOS or Android device, Hashable can help you grow your network by seeing who your friends are connecting with – There may also be a potential match there for you as well. If you feel that there’sa person in your network you think someone else should meet, you can “Send Intro Tweet” by picking the people you want to introduce, and adding a quick message. Bam! A Tweet will go out and @mention both parties. All this is done in the Hashable app without all the clutter or steps you would have to navigate through to handle the same task via your Twitter mobile client.

There is much more functionality in Hashable that I haven’t touched on, including a leader-board to see who is making the most connections, so you will have to download Hashable for the iPhone or Android and toss those business cards!