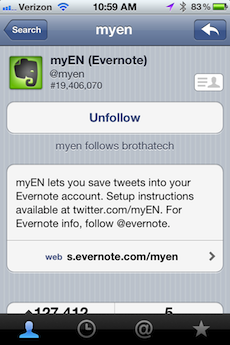 Organization Tip: Use @myEN to Sends Tweets to Evernote 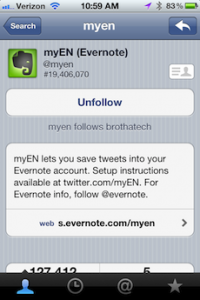 I use Evernote to save just about everything. The most important feature to me is no matter which device I use, I know all my notes will be synced up for access anywhere, even on the web.

I say “just about everything” because I was still doing some wonky stuff when it came to saving tweets to view later in Twitter. Sure, I could save them using the built-in favorites feature, but that’s only for messages in your timeline.

If you want to send tweets you compose to Evernote, there is an underrated feature that lets you do so by adding @myEN (My Evernote) to a tweet. It can be anywhere in the tweet and it can be a public tweet/reply or a Direct Message for your eyes only. As long as it’s there, your tweet will be sent to your default notebook in Evernote. Keep reading to learn how to set up this awesome feature.

– In Twitter, simply follow @myEN (don’t worry about the caps) and you will receive a Direct Message with a link. 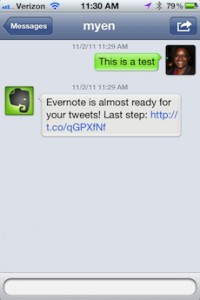 – Clicking the link will prompt you to login to Evernote to complete the process. If you dont’ have a Evernote account, now is the time to hook that up (it’s free) 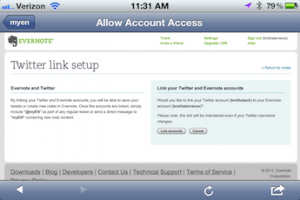 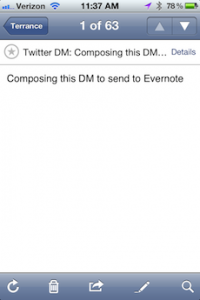 I live in Twitter, most of the connections I’ve made have been through Twitter. There are some tweets, mentions, replies, and DM’s that contain information that I may need to act on at a later date. Twitter is cool for sending tweets and reading my timeline, but when I want to search for information, Twitter is not the most organized platform…and the better you are at organization, the better you will be finding your info.

Since I already use Evernote for “just about everything else”, why not use Evernote to organize and keep track of important information that would other wise be lost in all that is Twitter? As fast as Twitter is at spreading information, you know how easy it is to miss something.