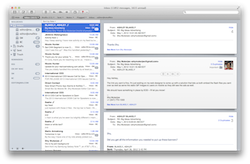 Email: The Driving Force of Mobile

I love social media, I really do.  Instagram, facebook, foursquare, and tumblr; these apps are some of the coolest available for our handhelds.  But it’s interesting to think about how all this communication would likely not be there if it weren’t for their big brother: email.

Email, and electronic communication in general, has long been the driving force of the internet. When the world went mobile, email emerged as the single most important feature of a mobile device (arguably even more important than the voice features).  RIM built a massive company mostly based around the idea of instant, secure mobile email devices.  Now, iPhone users spend less than half the time using their phone as a phone.  And in the last year, the use of smartphones by IT guys has gone from two thirds to almost all of them.

More impressively, just like web views, mobile devices are cannibalizing the desktop’s market share of opens.  This means that important business messages are being read on phones more now then ever.  My congressperson emails me, and at the bottom of the message reads the now-ubiquitous, ‘sent from my iPhone’.

Statistics still point to email as the number-one driving factor in mobile buying.  Even more than facebook or SMS, which is really just email with a different name.  Because of this, technology is  two-way street and the mobile platform has started to affect the email itself.  Messages are now less likely to have images, generally have less text, and of course now have bigger buttons and calls to action.

What’s the point of all of this? Email is not some new thing, right?  Wrong.  Mobile email is the new normal, and businesses should specifically plan for it.  This means revisiting your marketing email formats, revisiting your security policies, and everything in between.  How often do you check your email now compared to ten years ago?  Let us know in the comments.