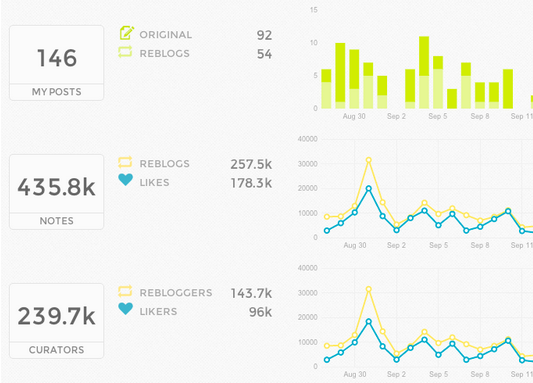 Tumblr Gets Social Analytics to Help Out Marketers

A sample of Union Metrics’ Analytics for Tumblr

Social network and microblogging platform Tumblr has recently announced a few new features that should make it even more attractive to marketers, including analytics to let brands look at how well their messages resonate on Tumblr.

By all measures, the service is incredibly popular. It hosts over almost 70 million blogs, and receives billions of views each month. Almost 50% of its users are under 25, making the service an especially appealing platform for marketers looking to reach the coveted 18 – 25 year old demographic. Plus it’s the kind of service that’s addictive: interactions with other users take place within the site’s “dashboard,” and it’s really heavy on video, visual and joke content. In other words, it’s fun.

If you haven’t used it, the big thing that sets it apart is the “Reblog.” Basically, with one push of a button you can copy the content of someone else to your own blog, and then comment on it if you want. Until now, there was no way for a brand to really measure the reach of all those reblogs or likes (the other key way of interacting with a post). That’s like not being able to measure the impact of retweets on Twitter, or shares on Facebook, and it was a real problem for marketers.

Union Metrics is Tumblr’s “preferred provider” to change all that. Currently beta testing with a handful of high profile brands, Union Metrics promises that users will soon be able to search for a blog, a post, a topic, a keyword, a tag, or even content source, all with the goal of seeing how many people have interacted with content and when. It promises to be another resource for small business owners and marketers looking to optimize their content for audiences of potential customers.

Union Metrics is promising a full roll out of their analytics next month, but in the meantime Tumblr’s “pinned posts” offer a way for brands and content creators to take advantage of the service without a lot of complication or in-depth analysis. Normally posts from blogs you follow show up in your dashboard in reverse-chronological order: most recent first, going back in time. “Pinned posts” just stay at the top of your feed, regardless of how many updates you receive. It’s almost like the Tumblr equivalent of eBay’s featured auction listings. And it only costs you $5, which is a great deal for a blog with a lot of followers.

By making themselves convenient for marketers at every scale, Tumblr is putting itself out there as a platform to be taken seriously. Lots of people already are: Barack Obama’s first official blog was on Tumblr. Have you tried it? Would you use it for your business?