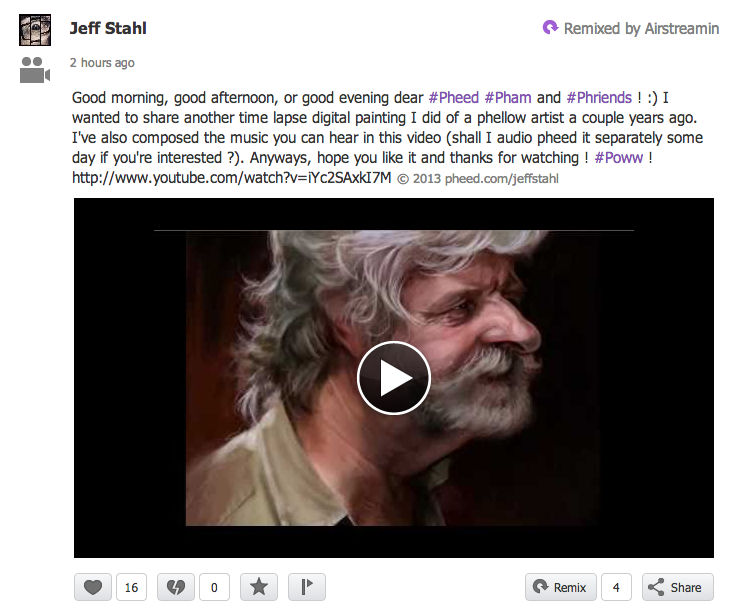 What is Pheed? Can it Help You Build Your Brand?

Believe it or not, there’s a new social network coming up that’s already popular enough to deserve your attention. It’s called Pheed, and it combines some of the best features of Tumblr and Twitter to create a real-time media stream (as if you weren’t surrounded by enough media already). 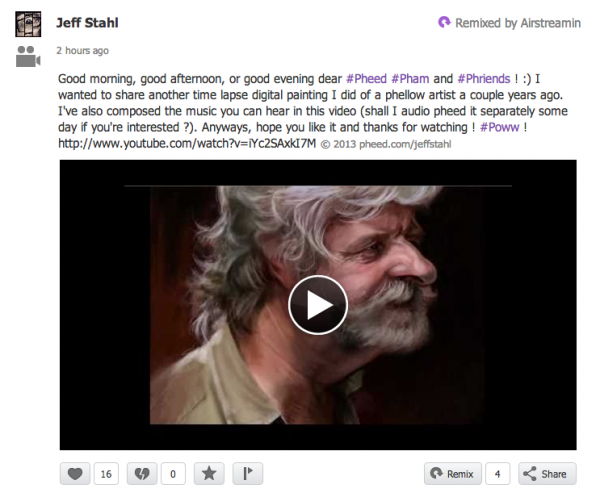 Like Twitter or Tumblr, the way you see Pheed content is by following others: when you sign up, Pheed will offer you choices about who to follow and ask you to pick 3 to get started. The content those users create is called their Pheed. (In case you’re curious, I chose users “Airstreamin” “Mulletvision” and “Chef Pasquale.” Fun.) The content I see so far is super heavy on pictures, complete with watermarks of the user’s url at the bottom. Pheed gives your the option to copyright your images and can automatically add the watermark, a great idea for both advertising and to help solve the ongoing image attribution drama that plagues just about every social site on the web. It’s also constantly streaming in real-time, and between the emphasis on speed and the visual, it’s clear this is not the right forum for your 3,000 word thinkpiece on the state of…anything.

Interacting with your pheeds (pheed feeds) happens in a very familiar way: you can love it (heart button!) or not love it (broken heart button!) or share it via the usual suspects. There’s also a feature called “remix,” which is a little confusing, in that it makes it sound like you’re going to interact with the post to change it somehow. In actuality it just republishes the post on your feed, a la Tumblr’s reblog button.

The real innovation here comes in the emphasis on entertainment: founded by LA people, the earliest users were entertainers, especially musicians. And that make sense: the ability to include audio, sound clips, video and live broadcast is not new for a social network, but it’s the big feature here and what sets the service apart. Plus, Pheed will let you charge, either for monthly access to your pheed, or for a one-time live broadcast event in the Pay-Per-View model.

The native ability to charge may be the most interesting idea for small business owners: Pheed is very mobile-based, so it could be a really interesting new way to set up discussions, tutorials or events that can bring in revenue to your business. If you have a visual or auditory business, using Pheed won’t be a lot more work beyond whatever social media you’re using already, and there’s definitely an early-adopter advantage for services like this. If you can establish a compelling brand (or pheed) and build a following, there are both interesting branding and revenue ideas that can come out of the new social network.