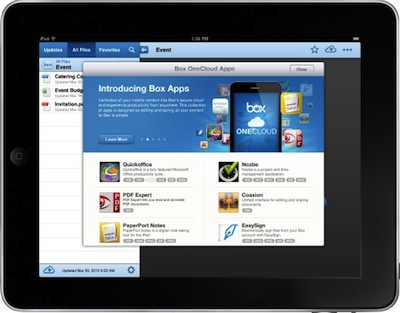 Nowadays, picking a cloud storage service so your mobile devices can have access to the same documents as your desktop/laptop can very well depend on how many other mobile apps are compatible. The major cloud storage services recognize this and have made sure that the majority of the apps you already use to “get things done” play nice with their offerings.

Box just made it easier for users to discover compatible 3rd Party apps by releasing an update to their iOS apps that includes the OneCloud menu that lists and allows users to download all compatible apps.

The short and sweet OneCloud is after you install or update the Box mobile apps for iPhone or iPad, you will have access to OneCloud app gallery menu that includes over 30 compatible apps including even tighter integration with some of the most popular business/productivity apps:

All of the apps in OneBox gallery will offer an iTunes link to quickly download. According to Chris Yeh, vice president of Platform at Box, they just started with OneBox integration with iOS devices because “they are the most popular in the enterprise”. Plans are already underway to offer similar functionality for Android devices sometime in May, and Windows Phone integration planned “as soon as they establish a foothold in the enterprise.”

One would think that since most enterprises run on Microsoft software/technology, that Windows Phone would be crushing the space…but that’s another post in an of itself.

Mobile cloud storage is just part of the issue. You also need other mobile apps that can pull your content from the cloud and give the you the ability to actually do something with them (edit, collaborate, and share). Instead of going to each individual app and finding out what cloud storage app it’s compatible with, Box now offers OneCloud that lists all 3rd-Party compatibility, without ever leaving the app.

So download/update Box for iOS and lets us know what you think in the comments section.